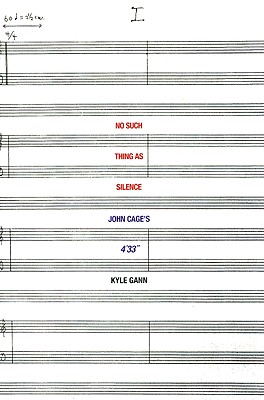 No Such Thing as Silence (Hardcover)

First performed at the midpoint of the twentieth century, John Cage's "4'33"," a composition conceived of without a single musical note, " "is among the most celebrated and ballyhooed cultural gestures in the history of modern music. A meditation on the act of listening and the nature of performance, Cage's controversial piece became the iconic statement of the meaning of silence in art and is a landmark work of American music.

In this book, Kyle Gann, one of the nation's leading music critics, explains "4'33" "as a unique moment in American culture and musical composition. Finding resemblances and resonances of "4'33"" in artworks as wide-ranging as the paintings of the Hudson River School and the music of John Lennon and Yoko Ono, " "he provides much-needed cultural context for this fundamentally challenging and often misunderstood piece. Gann also explores Cage's craft, describing in illuminating detail the musical, philosophical, and even environmental influences that informed this groundbreaking piece of music. Having performed "4'33" "himself and as a composer in his own right, Gann offers the reader both an expert's analysis and a highly personal interpretation of Cage's most divisive work.

Kyle Gann is Associate Professor of Music at Bard College, a composer, and former new-music critic for the"Village Voice." He lives in Germantown, NY."

“John Cage opened our ears to the whole world as music. In this engaging book, Kyle Gann opens our minds to the deep reverberations of Cage’s most radical, misunderstood and influential work.”—John Luther Adams, author of The Place Where You Go to Listen

“With composerly imagination and scholarly intelligence, Kyle Gann proves that 4''33" was not an offhand provocation, but John Cage''s most important piece and the key that unlocks the composer''s entire output.”—Robert Carl, author of Terry Riley’s In C

"An outstanding book. Gann not only makes 4''33" come alive, but also makes the writing of it feel important and artistically necessary. All in all, a big achievement"—William Duckworth, Bucknell University

“Deftly profiling Cage and his influences in the process, Gann entrancingly communicates his love and fascination with Cage’s musical milestone in a spellbinding chapter of high-cultural history.”--Booklist, starred review

“Though Gann clearly respects Cage and 4''33", he doesn’t worship either blindly, and that critical appreciation makes his argument that this is a radical ‘act of listening,’ not a provocative stunt, all the more compelling.”--Publishers Weekly


“The former Village Voice new-music critic examines the ways in which Cage''s piece was and is boosted and derided, and the result is an easily digestible yet illuminating volume.”—J. Gabriel Boylan, Bookforum

“4''33", Gann argues, though often suspected of being merely a ‘provocative stunt,’ is actually one of the best understood and most influential works of avant-garde music. . . . In describing the piece’s premières and reception, Gann recaptures its ‘Promethean’ impact, which cost Cage some friends and prompted his mother to ask, ‘Don’t you think that John has gone too far this time?’ ”--The New Yorker


"Gann''s book amply demonstrates [that] Cage''s so-called silent piece is as resonant with philosophical, historical, and acoustical complexities as many a noisier composition. . . . Gann''s account so perceptively synthesizes the irreducible disparity about the origin of Cage''s seemingly simple gesture that it will doubtlessly become the (unstable) foundation for many future interpretive engagements with the piece. . . . It is the great merit of Gann''s book to have revealed just how multidimensional even Cage''s most seemingly unidimensional gesture can be."—Brandon Joseph, American Music
-Brandon Joseph