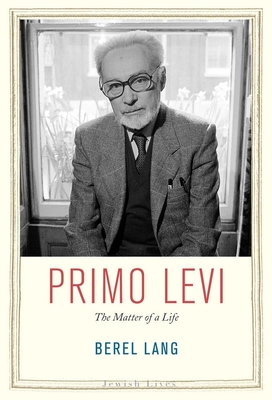 The Matter of a Life (Jewish Lives)

From the prizewinning Jewish Lives series, the first intellectual biography of Primo Levi to describe the intersection of his roles as both chemist and writer

In 1943, twenty-four-year-old Primo Levi had just begun a career in chemistry when, after joining a partisan group, he was captured by the Italian Fascist Militia and deported to Auschwitz. Of the 650 Italian Jews in his transport, he was one of fewer than 25 who survived the eleven months before the camp’s liberation. Upon returning to his native Turin, Levi resumed work as a chemist and was employed for thirty years by a company specializing in paints and other chemical coatings. Yet soon after his return to Turin, he also began writing—memoirs, essays, novels, short stories, poetry—and it is for this work that he has won international recognition. His first book, If This Is a Man, issued in 1947 after great difficulty in finding a publisher, remains a landmark document of the twentieth century. Berel Lang's groundbreaking biography shines new light on Levi’s role as a major intellectual and literary figure—an important Holocaust writer and witness but also an innovative moral thinker in whom his two roles as chemist and writer converged, providing the “matter” of his life. Levi’s writing combined a scientist’s attentiveness to structure and detail, an ironic imagination that found in all nature an ingenuity at once inviting and evasive, and a powerful and passionate moral imagination. Lang’s approach provides a philosophically acute and nuanced analysis of Levi as thinker, witness, writer, and scientific detective.

Praise For Primo Levi: The Matter of a Life (Jewish Lives)…

"Berel Lang's brilliantly nuanced book is, as far as I know, the first to successfully extract a philosophically coherent worldview from Primo Levi's artistic, biographical and essayistic writing. Such an enterprise requires tact, subtlety, and sensitivity to what is implicit and latent in a writer like Levi, whose 'clarity' masks as well as manifests the complexity of his sensibility."—Hayden White, University of California

"Lang develops a strikingly original approach to an old problem: the relation of thought and feeling to experience. Primo Levi says much that is new, and compelling, in an area where it was hard to imagine there was anything new to be said."—Howard Needler, Wesleyan University

"Lang has written a wise and deeply-felt examination of the personal and philosophical conditions that made Primo Levi’s work possible."—William Giraldi, New Republic
— William Giraldi

“Professor Lang has written an informative and wide-ranging guide to the life and work of a man, who like Dante before him, had been to hell and back.”—Ian Thomson, Evening Standard
— Ian Thomson

"Berel Lang has given us a fresh vision of a fascinating and rather mysterious figure."—Philip K. Jason, Jewish Book Council
— Philip K. Jason

“In this concise, well-researched, unemotional account of the writer’s life and death, philosopher and Holocaust scholar Berel Lang remains scrupulously agnostic about such straightforward cause and effect.”—Tim Adams, The Observer
— Tim Adams

Berel Lang is Professor of Philosophy Emeritus, State University of New York, Albany. He is the author or editor of twenty-one books, including Act and Idea in the Nazi Genocide, The Concept of Style, and, most recently, Philosophical Witnessing: The Holocaust as Presence. He lives in Riverdale, NY.
Loading...
or
Not Currently Available for Direct Purchase