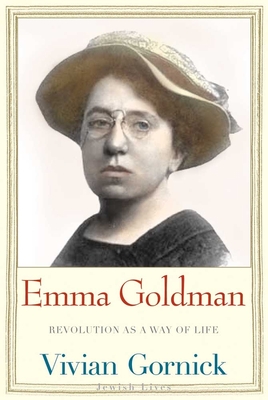 Revolution as a Way of Life (Jewish Lives)

From the prizewinning Jewish Lives series, a vibrant, deeply human portrait of a woman dedicated to fierce protest against the tyranny of institutions over individuals, by the celebrated author

Emma Goldman is the story of a modern radical who took seriously the idea that inner liberation is the first business of social revolution. Her politics, from beginning to end, was based on resistance to that which thwarted the free development of the inner self. The right to stay alive in one’s senses, to enjoy freedom of thought and speech, to reject the arbitrary use of power—these were key demands in the many public protest movements she helped mount.

Anarchist par excellence, Goldman is one of the memorable political figures of our time, not because of her gift for theory or analysis or even strategy, but because some extraordinary force of life in her burned, without rest or respite, on behalf of human integrity—and she was able to make the thousands of people who, for decades on end, flocked to her lectures, feel intimately connected to the pain inherent in the abuse of that integrity. To hear Emma describe, in language as magnetic as it was illuminating, what the boot felt like on the neck, was to experience the mythic quality of organized oppression. As the women and men in her audience listened to her, the homeliness of their own small lives became invested with a sense of drama that acted as a catalyst for the wild, vagrant hope that things need not always be as they were. All you had to do, she promised, was resist. In time, she herself would become a world-famous symbol for the spirit of resistance to the power of institutional authority over the lone individual.

In Emma Goldman, Vivian Gornick draws a surpassingly intimate and insightful portrait of a woman of heroic proportions whose performance on the stage of history did what Tolstoy said a work of art should do: it made people love life more.

Vivian Gornick is the author of, among other books, the acclaimed memoir Fierce Attachments and three essay collections: The End of the Novel of Love, Approaching Eye Level, and, most recently, The Men in My Life. She lives in New York City.

Praise For Emma Goldman: Revolution as a Way of Life (Jewish Lives)…

"Arresting . . . Gornick sees Goldman's lifelong commitment to anarchism as doing 'what Tolstoy said a work of art should do: It made people love life more'; this generous book does the same."—New Yorker
— New Yorker

“Vivian Gornick has a gripping new entry in Yale’s Jewish Lives series...She has breathed new life into one of the liveliest figures of modern history—not a rebel without a cause but a rebel with many causes.”—David Shribman, Boston Globe
— David Shribman

"Vivian Gornick brings Emma Goldman to life, evokes her spirit in all its ambition and anguish, and explains why today's reader should care about her rebelliousness and audacity. Gornick makes clear that, ideology aside, Goldman's will to take her life in her hands, her striving to reconcile the stirrings of the personal soul with the social imperative, are an inspiration."—Todd Gitlin, author of The Sixties: Years of Hope, Days of Rage
— Todd Gitlin

"With wit and insight, Gornick urges readers to feel what Goldman felt, to ponder what made her kick against conditions that her contemporaries meekly accepted, and to ask whether things are so different today."—Publishers Weekly
— Publishers Weekly

"A ferocious, high-strung and enlightening biography . . . This slender volume, out from Yale University Press as part of their Jewish Lives series, can now be counted among the indispensable guides to Goldman's life."—Virginia Hefferman, Moment
— Virginia Hefferman

"Gornick offers a surprisingly nuanced account of Goldman's political dilemmas . . . What's truly haunting is the way Gornick shows us a woman ahead of her times—maybe even ahead of our times."—Bettina Berch, Jewish Book Council
— Bettina Berch

"[L]ean and searching . . . Gornick’s subdued prose is a welcome foil to what she rightly calls Goldman’s “high-flown rhetoric,” and her biography is a fine primer into 'the despair and the excitement of revolt'—for the budding anarchist, the seasoned activist, and the armchair occupier alike."—Anne Gray Fischer, Ploughshares
— Anne Gray Fischer