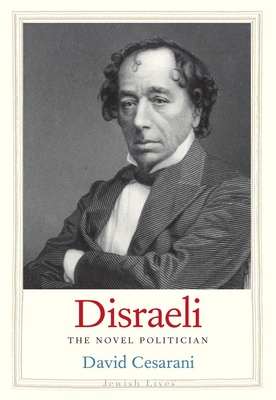 From the prizewinning Jewish Lives series, a fresh, vivid look at Disraeli's life, achievements, and temperament that casts doubts on his much-touted commitment to Jewish rights

Lauded as a “great Jew,” excoriated by antisemites, and one of Britain’s most renowned prime ministers, Benjamin Disraeli has been widely celebrated for his role in Jewish history. But is the perception of him as a Jewish hero accurate? In what ways did he contribute to Jewish causes? In this groundbreaking, lucid investigation of Disraeli’s life and accomplishments, David Cesarani draws a new portrait of one of Europe’s leading nineteenth-century statesmen, a complicated, driven, opportunistic man.

While acknowledging that Disraeli never denied his Jewish lineage, boasted of Jewish achievements, and argued for Jewish civil rights while serving as MP, Cesarani challenges the assumption that Disraeli truly cared about Jewish issues. Instead, his driving personal ambition required him to confront his Jewishness at the same time as he acted opportunistically. By creating a myth of aristocratic Jewish origins for himself, and by arguing that Jews were a superior race, Disraeli boosted his own career but also contributed to the consolidation of some of the most fundamental stereotypes of modern antisemitism.

David Cesarani (1956–2015) was a research professor in History at Royal Holloway, University of London, and director of the Holocaust Research Centre. In 2005 he was named an Officer of the Order of the British Empire for his work in establishing a Holocaust Memorial Day in the UK.

“This groundbreaking biography is a passionate and stimulating account of Disraeli as both man and myth. With pace and clarity the author, writing at the height of his powers, skillfully and intelligently unravels the enduring mystery of Disraeli's Jewishness.”—Bryan Cheyette, author of Diasporas of the Mind
— Bryan Cheyette

“This well-researched new biography uses Disreali’s wide range of novels to address fascinating questions about him and provide a close reading of his political career and shifting loyalties… Cesarani doesn’t gloss over Disreali’s weaknesses: his numerous affairs, profligacy and constant debt (only parliamentary immunity kept him out of prison). Yet his portrait of this complex figure remains sympathetic…”—Sara Jo Ben Zvi, Segula
— Sara Jo Ben Zvi
or
Not Currently Available for Direct Purchase
Copyright © 2020 American Booksellers Association