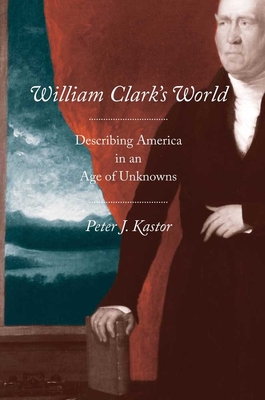 William Clark, co-captain of the famous Lewis and Clark Expedition, devoted his adult life to describing the American West. But this task raised a daunting challenge: how best to bring an unknown continent to life for the young republic? Through Clark's life and career, this book explores how the West entered the American imagination. While he never called himself a writer or an artist, Clark nonetheless drew maps, produced books, drafted reports, surveyed landscapes, and wrote journals that made sense of the West for a new nation fascinated by the region’s potential but also fearful of its dangers. William Clark’s World presents a new take on the manifest destiny narrative and on the way the West took shape in the national imagination in the early nineteenth century.

Peter J. Kastor is associate professor of history and American culture studies, Washington University in St. Louis. He is the author of The Nation’s Crucible: The Louisiana Purchase and the Creation of America, published by Yale University Press. He lives in St. Louis, MO.

Praise For William Clark's World: Describing America in an Age of Unknowns (The Lamar Series in Western History)…

“Professor Peter Kastor has written an engaging, interesting, and important monograph tackling a big question: 'How do you describe a continent?' The author is convincing in his narrative, offers new insights, and has written it in engaging prose that is both illuminating to the specialist and accessible to the general audience."—Jay Buckley, Author of William Clark: Indian Diplomat
— Jay H. Buckley

"In this book, William Clark and other explorers are less brave adventurers in an unbroken tradition of expansion than imperial agents whose representations of North America tell us as much about them and the limits of their world as they do about the continent they professed to master.  Kastor's analysis of official reports, journals and maps is fascinating, as are his accounts of their publication and reception.”—Andrew Cayton, Miami University
— Andrew Cayton

“Drawing on a rich array of sources including maps, letters, paintings, and public documents, this book sheds new light on the production of the American West and creatively recovers a crucial aspect of American territoriality as it emerged on the nation’s frontier rather than at its center. Kastor explains to great effect the shift in popular attitude towards expansionism, which, while rejected in the 1780s, was embraced with unbridled boosterism in the 1830s.”—Martin Brückner, Author of The Geographic Revolution in Early America

“Long before paintings, photographs and films depicted the West as a place of national romance, maps offered the best visual record of this little known place. By paying close attention to the maps produced by William Clark and his contemporaries, Peter Kastor instructs us in how to read maps as rich cultural and political texts, and offers a fresh new way to understand the place of the West in American life during the early republic.”—Martha A. Sandweiss, author of Print the Legend: Photography and the American West

"For both scholars and general readers, William Clark's World is essential reading not only for an illumination of exploration, surveying, and mapping the American West during the nation's early years but also for understanding the origins of Manifest Destiny" — John H. Monnet, Metropolitan State College of Denver
— John H Monnet
or
Not Currently Available for Direct Purchase
Copyright © 2020 American Booksellers Association