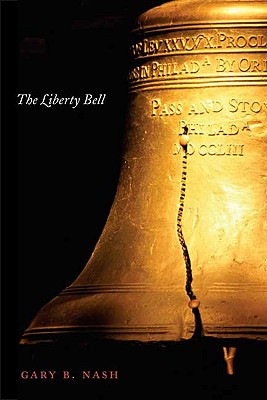 Each year, more than two million visitors line up near Philadelphia's Independence Hall and wait to gaze upon a flawed mass of metal forged more than two and a half centuries ago. Since its original casting in England in 1751, the Liberty Bell has survived a precarious journey on the road to becoming a symbol of the American identity, and in this masterful work, Gary B. Nash reveals how and why this voiceless bell continues to speak such volumes about our nation.

A serious cultural history rooted in detailed research, Nash's book explores the impetus behind the bell's creation, as well as its evolutions in meaning through successive generations. With attention to Pennsylvania's Quaker roots, he analyzes the biblical passage from Leviticus that provided the bell's inscription and the valiant efforts of Philadelphia's unheralded brass founders who attempted to recast the bell after it cracked upon delivery from London's venerable Whitechapel Foundry. Nash fills in much-needed context surrounding the bell's role in announcing the Declaration of Independence and recounts the lesser-known histories of its seven later trips around the nation, when it served as a reminder of America's indomitable spirit in times of conflict. Drawing upon fascinating primary source documents, Nash's book continues a remarkable dialogue about a symbol of American patriotism second only in importance to the Stars and Stripes.


Praise For The Liberty Bell…

"With this book, Gary Nash has brought the Liberty Bell back to life as part of the maelstrom of American history. Few Americans know the history of the Liberty Bell, and no one tells its story better than Nash."—Robert Rydell, Montana State University
-Robert Rydell

"Gary Nash tells an absorbing tale of how a magnificent but broken object, the Liberty Bell, has captured the imagination of Americans and come to symbolize the value of freedom in our democracy. This turns out to be a quite surprising and absorbing story, a real page-turner.  It is a compelling book, written by a master historian at the height of his powers."—Stanley N. Katz, Princeton University
-Stanley N. Katz

"This is the kind of history that all Americans should know, a rousing tale of how a defective bell came to be both the mirror of a people and the vessel of their ideals. The eminent historian Gary Nash excavates the myths that have surrounded the Liberty Bell for more than 250 years and explicates the many and varied roles it has played – and is still playing – in the life of our nation.   The Bell has been adopted as a potent symbol by groups as disparate as abolitionists, woman suffragists, opponents of child labor, and Cold Warriors. It has been a rallying point during America''s wars and a beacon of hope to people of all nations. In seven trips around the country the Liberty Bell has secured its place as an icon uniting a nation, even as its current pavilion home is mired in controversy about the place of slavery in the land of the free. Nash’s superb book is cultural history at its best."—John C. Van Horne, The Library Company of Philadelphia


“It is an unlikely central character for a book: A silent, 250-year-old bell. Yet in The Liberty Bell, a biography of our nation’s ‘nearly sacred totem,’ Gary B. Nash provides a stirring historical account of the icon that is America’s ‘Rosetta Stone or . . . Holy Grail.’”—T. Rees Shapiro, Washington Post

"[A] breezy and thoroughly entertaining history of America''s most beloved bell. . . . In this fine and readable book, Nash not only gives us a terrific biography of this one-ton piece of metal, but he reminds us that, perhaps more than anything else in American life, the Liberty Bell has served as a touchstone for us to contemplate the complicated and contested meaning of the very notion of liberty."—Steben Conn, Pennsylvania Magazine of History and Biography
-Steven Conn

"Far more than a tribute to a revered inanimate object, this book places this U.S. liberty icon in the ever-changing context of Americans coping with the meaning of freedom."—H. M. Ward, Choice
-H. M. Ward

". . . a brisk, fascinating volume . . . Nash''s prose has always been clear and vigorous, but rarely as lively and bright as it is here."—Douglas R. Egerton, Common-place
-Douglas R. Egerton

"This short biography of an American icon delivers an efficient and engaging account of the place of the bell in U.S. history. . . . The result is a narrative that is brisk and instructive, yet also subtle and complex."—Marla R. Miller, Register of the Kentucky Historical Society
-Marla R. Miller

Gary B. Nash is professor of history and director of the National Center for History in the Schools at UCLA. He is former president of the Organization of American Historians, and his 1979 book The Urban Crucible: Social Change, Political Consciousness, and the Origins of the American Revolution was a finalist for the Pulitzer Prize in history. He lives in Los Angeles.