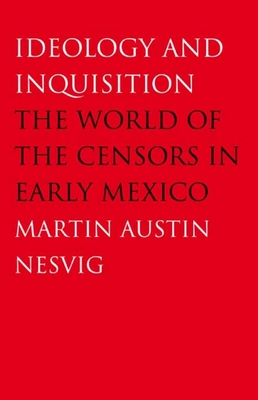 The World of the Censors in Early Mexico

This book is the first comprehensive treatment in English of the ideology and practice of the Inquisitional censors, focusing on the case of Mexico from the 1520s to the 1630s. Others have examined the effects of censorship, but Martin Nesvig employs a nontraditional approach that focuses on the inner logic of censorship in order to examine the collective mentality, ideological formation, and practical application of ideology of the censors themselves.

Nesvig shows that censorship was not only about the regulation of books but about censorship in the broader sense as a means to regulate Catholic dogma and the content of religious thought. In Mexico, decisions regarding censorship involved considerable debate and disagreement among censors, thereby challenging the idea of the Inquisition as a monolithic institution. Once adapted to cultural circumstances in Mexico, the Inquisition and the Index produced not a weapon of intellectual terror but a flexible apparatus of control.

Martin Nesvig is assistant professor of history at the University of Miami. He is the editor of Local Religion in Colonial Mexico and Religious Culture in Modern Mexico.


Praise For Ideology and Inquisition: The World of the Censors in Early Mexico…

"We like to think of the Spanish Inquisition as a well-oiled institution, efficiently stamping out dissent.  In a marvelously crafted study, Martin Nesvig shows the many fault lines in such an account. The shibboleths of the past give way to a nuanced narrative, painstakingly based on archival research. Nesvig demonstrates that in Mexico, the Inquisition was a rather inefficient repressive apparatus, constantly changing and constitutionally riddled by competing ideological agendas. Nesvig sheds abundant new light on the workings of (canon) law in the early modern Spanish Empire. The flexibility with which censure and the law were applied could well explain the longevity of the empire."—Jorge Cañizares-Esguerra, University of Texas at Austin
— Jorge Cañizares-Esguerra