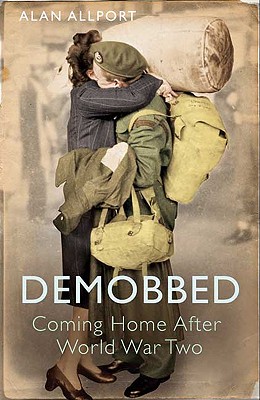 What happened when millions of British servicemen were demobbed demobilized after World War II? Most had been absent for years, and the joy of arrival was often clouded with ambivalence, regrets, and fears. Returning soldiers faced both practical and psychological problems, from reasserting their place in the family home to rejoining a much-altered labor force. Civilians worried that their homecoming heroes had been barbarized by their experiences and would bring crime and violence back from the battlefield. Drawing on personal letters and diaries, newspapers, reports, novels, and films, Alan Allport illuminates the darker side of the homecoming experience for ex-servicemen, their families, and society at large a gripping story that's in danger of being lost to national memory.

Alan Allport is a postdoctoral lecturer at Princeton University. He lives in Princeton, NJ.

Praise For Demobbed: Coming Home After the Second World War…

“A highly impressive debut, demonstrating great scholarship and an ability to balance the humane detail of fractured lives with a wider perspective of the political and social context … This is a bold attempt to combine the scholarly with the popular and certainly the most insightful text on the 1940s to have appeared this year.”
—Ian Cawood, Times Literary Supplement

“Allport’s wonderfully insightful study asks us to rethink the conventional chronology … It is not only refreshingly free of jargon but remarkably moving. If all academic history were written this way, popular historians would be out of a job.” —Dominic Sandbrook, Sunday Times

"A wry, humane and eloquent book. Alan Allport shows how demobilized troops, their families and friends, both sought a return to normalcy and at the same time realized that life would never be the same again. Their stories linger into the present day."—Peter Mandler, author of The English National Character

"This is a special and a powerful book. It brims with scholarship, insight, detail and compassion. It is also very well written. Allport does full justice to a forgotten part of a great generation." - Peter Hennessy

"Demobbed  is a fascinating work. With many compelling individual stories, Alan Allport plunges us into this often sad and sometimes violent time after the end of the Second World War. It is a powerful tale, wonderfully told." - Peter Stansky, author of The First Day of the Blitz
-Peter Stansky

“[A] masterful study of the subject … Demobbed is a detailed and sympathetic examination of this difficult story. Making imaginative use of contemporary court and press accounts as well as the holdings of the Imperial War Museum Archive, it outlines the tribulations of a damaged generation, intertwining personal testimony with the author’s thoughtful and cogent analysis … [Demobbed] wears its erudition lightly and has a pleasing, easy style.”  —BBC History Magazine


“Alive with portraits of individuals. . .Demobbed is a juicy slice of life redolent of the peculiar atmosphere and singular situations unique to Britain in the mid-1940s.”--Martin Rubin, The Washington Times

"An extremely interesting and lively read which adds greatly to our understanding of the demobilization process."--Mark Connelly, The Journal of Military History
-Mark Connelly

"His tone, narrative sense, and command of sources are commendable, and he lays the groundwork for further research. More than contributing a postscript to wartime historiography, this book should be of interest to all historians of twentieth-century Britain."—Chad Martin, The Journal of Modern History
-Chad Martin