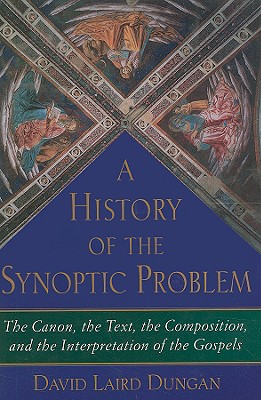 A History of the Synoptic Problem

The Canon, the Text, the Composition, and the Interpretation of the Gospels (The Anchor Yale Bible Reference Library)

A History of the Synoptic Problem, by David Laird Dungan, is an accessible, academic study of a question that has needled readers of the New Testament since before the Bible was canonized: How does one reconcile the different accounts of Jesus's life given by the four gospels? Today the most highly publicized answer to this question is the one offered by John Dominic Crossan and the Jesus Seminar, who seek to reconcile the differences among the gospels by designating some events and statements in the gospels historically true and others false. There are lots of other ways to explore the synoptic problem, however, and Dungan provides a clear and lively history of the strategies employed by Origen, Augustine, Erasmus, Spinoza, Locke, and others. Dungan's method is to break the synoptic problem down into its corollary questions: Which gospels should be considered in the debate? Which text of each gospel should be considered? And how should one read the Bible in general and the gospels in particular? Dungan's interest in these questions is not merely literary; he also delves into the political and economic agendas that have influenced biblical interpretation. In this regard, the most interesting and original connection he makes is to explain the relationship between the rise of the modern historical-critical method of reading scripture (asking who wrote the books of the Bible, when, how, and for whom) and the creation and maintenance of political democracy--and furthermore, the ways in which fundamentalist "literal" readings of Scripture serve the same goal. Dungan's own investment in debates on the synoptic problem is shot through with an appealing humility about the stakes of the debate. "At its deepest level, the Synoptic Problem is not a scientific 'problem'," he writes. "[T]he quest for the correct solution to the Synoptic Problem, like the Church's quest for the correct canon of the Gospels, and the correct text of the Gospels, and the correct way to interpret the Gospels, is a vital aspect of the Church's perennial quest for the Word of Life."

David Dungan is Professor of Religion at the University of Tennessee in Knoxville and author, with David R. Cartlidge, of Documents of the Study of the Gospels, rev. and enlarged edition.
Loading...
or
Not Currently Available for Direct Purchase