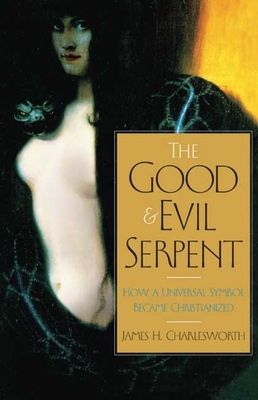 The Good and Evil Serpent

A pathbreaking study of the serpent’s symbolic meanings from 40,000 BCE to the present day

In a perplexing passage from the Gospel of John, Jesus is likened to the most reviled creature in Christian symbology: the snake. Attempting to understand how the Fourth Evangelist could have made such a surprising analogy, James H. Charlesworth has spent nearly a decade combing through the vast array of references to serpents in the ancient world—from the Bible and other religious texts to ancient statuary and jewelry. Charlesworth has arrived at a surprising conclusion: not only was the serpent a widespread symbol throughout the world, but its meanings were both subtle and varied. In fact, the serpent of ancient times was more often associated with positive attributes like healing and eternal life than it was with negative meanings.

This groundbreaking book explores in plentiful detail the symbol of the serpent from 40,000 BCE to the present, and from diverse regions in the world. In doing so it emphasizes the creativity of the biblical authors’ use of symbols and argues that we must today reexamine our own archetypal conceptions with comparable creativity.


Praise For The Good and Evil Serpent: How a Universal Symbol Became Christianized (The Anchor Yale Bible Reference Library)…

"In this masterpiece, the snake emerges from the Garden of Eden in Genesis and carries on an unending hostility to human kind in the closing chapters of the book of Revelation. This book is packed with data about this mysterious creature and backed by compelling evidence and argumentation. I recommend it unreservedly to any and all with an interest in this fascinating subject."—David Noel Freedman

“Charlesworth has done us all an immense service in pulling together evidence from around the world and through the ages of the crucial role snakes have played in the human story.”—James A. Sanders, Claremont School of Theology

"Making use of his vast knowledge in archaeology and ancient literature, Professor Charlesworth has written an outstanding research on serpent symbolism, which is certainly to become the standard book of reference to this topic in the years to come."—Adolfo Roitman, The Israel Museum, Jerusalem

“Charlesworth provides indispensable material for anyone studying the symbolic use of snakes.”—Pheme Perkins, America

"[A] very handy reference tool for Classicists and specialists in Near Eastern Studies, as well as Biblicists . . . even lay persons will find his book accessible."—Isaac W. Oliver, International Journal of the Classical Tradition
— Isaac W. Oliver

"[A] superb introduction to, and analysis of, ophidian symbolism and function in the ancient world."—Marvin A. Sweeney, Journal of American Academy of Religion
— Marvin A. Sweeney

James H. Charlesworth is George L. Collord Professor of New Testament Language and Literature, and director and editor of the Princeton Dead Sea Scrolls Project, Princeton Theological Seminary. He is the author or editor of more than sixty books and six hundred articles. He lives in Princeton, NJ.