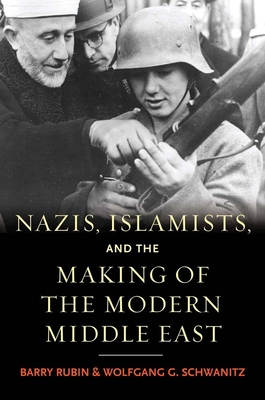 Nazis, Islamists, and the Making of the Modern Middle East

During the 1930s and 1940s, a unique and lasting political alliance was forged among Third Reich leaders, Arab nationalists, and Muslim religious authorities. From this relationship sprang a series of dramatic events that, despite their profound impact on the course of World War II, remained  secret until now. In this groundbreaking book, esteemed Middle East scholars Barry Rubin and Wolfgang G. Schwanitz uncover for the first time the complete story of this dangerous alliance and explore its continuing impact on Arab politics in the twenty-first century. Rubin and Schwanitz reveal, for example, the full scope of Palestinian leader Amin al-Husaini’s support of Hitler’s genocidal plans against European and Middle Eastern Jews. In addition, they expose the extent of Germany’s long-term promotion of Islamism and jihad. Drawing on unprecedented research in European, American, and Middle East archives, many recently opened and never before written about, the authors offer new insight on the intertwined development of Nazism and Islamism and its impact on the modern Middle East.


Praise For Nazis, Islamists, and the Making of the Modern Middle East…

"[Nazis, Islamists] reinsert[s] racial ideology into the study of the desert conflict and thereby offer[s] new insights into the Nazis’ relationships with their North African and Middle Eastern partners."—Mia Lee, Contemporary European History

"This book tells a remarkable and–to me at least–little known but very important story."—Marshall Poe, New Books in History

"This book is a model of original research and the ultimate scholarly study of German-Arab and German-Muslim cooperation during the first half of the twentieth century, covering both World Wars. It is a major contribution in the field, a magnum opus."—Jacob M. Landau, Hebrew University of Jerusalem

"This book presents an abundance of previously un- or under examined material. It is most impressive and greatly advances our knowledge."—Jeffrey Herf, University of Maryland

"In this hugely important book Barry Rubin and Wolfgang G. Schwanitz show that not only did Nazism enjoy widespread popularity in the contemporary Middle East, but its profound effects on pan-Arabist and Islamist thinking, as well as the evolution of Palestinian Arab nationalism, continue to reverberate throughout the region to date. A must read."—Efraim Karsh, King’s College London

"Rubin and Schwanitz have done a major, double service - by tracing the historical links between Islamist jihadism and German policy from the Wilhelmine to the Nazi eras; and by highlighting the common (anti-democratic, anti-liberal and anti-Semitic) ideological basis of Nazism and Islamism during the Second World War. The center-piece of their study is the description of the mid-20th century alliance between the Nazis and militant Arab nationalists, which still affects current Middle Eastern politics and policies."—Benny Morris, author of One State, Two States

"Nazis, Islamists and the Making of the Modern Middle East  is a welcome addition to the short list of indispensable books on the Arab-Israeli conflict. We owe a great debt to Barry Rubin and to Wolfgang G. Schwanitz for revealing an urgent story the international community should have known but somehow missed -- a story that is a key to understanding how we got to this current moment in the Middle East."—Yossi Klein Halevi, Shalom Hartman Institute

Barry Rubin is director of the Global Research in International Affairs Center of the Interdisciplinary Center, Israel. He is the author of many books and publishes frequently on Middle East topics. He lives in Tel Aviv, Israel.

Wolfgang G. Schwanitz is visiting professor at the Global Research in International Affairs Center of the Interdisciplinary Center, Israel, and an associate fellow at the Middle East Forum of Pennsylvania. He lives in New Jersey.
Loading...
or
Not Currently Available for Direct Purchase