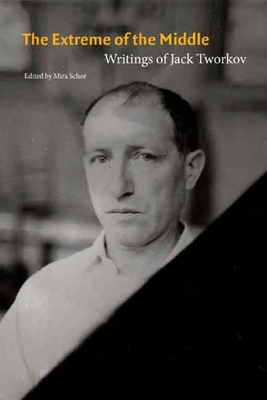 The Extreme of the Middle

Jack Tworkov (1900–1982) was a significant figure of the Abstract Expressionist period. A noted painter, he was one of the first group of artists who defined the ideals of the New York School, along with Willem de Kooning, Barnett Newman, Ad Reinhardt, and Franz Kline, among others. This book, the first collection of Tworkov’s writings, sheds new light on the lives and studio practices of Tworkov and his colleagues as well as on Tworkov’s artistic theories and values.

These enlightening and intimate writings—personal journals and letters, teaching notebooks, correspondence with other artists, previously unpublished essays, and published articles—are introduced and annotated by Mira Schor, who provides an informed account of an important artist and thinker. The book is enriched by photographs by Henri Cartier-Bresson, Irving Penn, Arnold Newman, and Robert Rauschenberg; family photographs with Hans Hofmann, John Cage, Kline, and others; and reproductions of some of Tworkov’s finest work.


Praise For The Extreme of the Middle: Writings of Jack Tworkov…

"In the course of his long life as a painter, Jack Tworkov became an important figure in the maturation of abstract art in America."—Richard Armstrong, director of the Solomon R. Guggenheim Foundation and Museum

"Jack Tworkov was a free thinker in an ideological time. This collection is an indispensable addition to the story of American art."—Mark Stevens, co author of the Pulitzer Prize winning biography de Kooning: An American Master

"Tworkov, one of the original Abstract Expressionists whose mark on the history of painting is inexpugnable, accomplished a great deal in a long and rich life, not only as an artist but as a teacher and a mensch. And his writings are a considerable contribution to the art history of his time. Their subject is not so much aesthetics or form as the ethics of art."—Barry Schwabsky, The Nation

"Mira Schor, who knew Tworkov from her childhood, has done a scrupulous job in editing his journals, letters, notebooks, and essays. . . . It's a big book with informative footnotes, interesting photographs, and a sampling of Tworkov's paintings reproduced in color."—William Corbett, Art in New England
— William Corbett

Mira Schor is a painter and author who also teaches at Parsons The New School for Design.