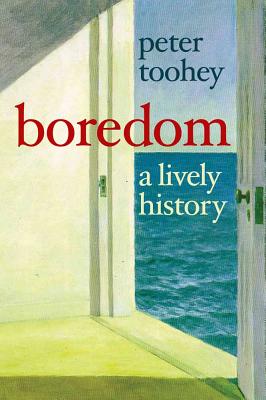 In the first book to argue for the benefits of boredom, Peter Toohey dispels the myth that it's simply a childish emotion or an existential malaise like Jean-Paul Sartre's nausea. He shows how boredom is, in fact, one of our most common and constructive emotions and is an essential part of the human experience.

This informative and entertaining investigation of boredom what it is and what it isn't, its uses and its dangers spans more than 3,000 years of history and takes readers through fascinating neurological and psychological theories of emotion, as well as recent scientific investigations, to illustrate its role in our lives. There are Australian aboriginals and bored Romans, Jeffrey Archer and caged cockatoos, Camus and the early Christians, Durer and Degas. Toohey also explores the important role that boredom plays in popular and highbrow culture and how over the centuries it has proven to be a stimulus for art and literature.

Toohey shows that boredom is a universal emotion experienced by humans throughout history and he explains its place, and value, in today's world. "Boredom: A Lively History "isvital reading for anyone interested in what goes on when supposedly nothing happens.

Peter Toohey is a professor in the Department of Greek and Roman Studies at the University of Calgary. His previous books include "Melancholy, Love and Time: Boundaries of the Self in Ancient Literature." He lives in Calgary, Canada.

Praise For Boredom: A Lively History…

"Readers who are willing to meander from science to literature to art and other realms will find themselves engaged."—Nina C. Ayoub, The Chronicle Review
-Nina C. Ayoub

"[Toohey] makes a persuasive case that there are even benefits to boredom, and at the very least this engaging read proffers a temporary antidote to the noonday demon."—Kelly McMasters, Newsday
-Newsday