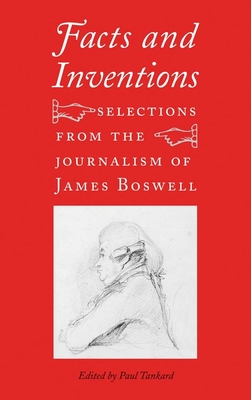 Selections from the Journalism of James Boswell

James Boswell (1740–1795), best known as the biographer of Samuel Johnson, was also a lawyer, journalist, diarist, and an insightful chronicler of a pivotal epoch in Western history. This fascinating collection, edited by Paul Tankard, presents a generous and varied selection of Boswell’s journalistic writings, most of which have not been published since the eighteenth century. It offers a new angle on the history of journalism, an idiosyncratic view of literature, politics, and public life in late eighteenth-century Britain, and an original perspective on a complex and engaging literary personality.

Paul Tankard is Senior Lecturer in English at the University of Otago, Dunedin, New Zealand.

Praise For Facts and Inventions: Selections from the Journalism of James Boswell…

“Paul Tankard illuminates not only neglected corners of Boswell’s interests and career, but the wider journalistic culture of late eighteenth-century Britain, bringing to new attention the topics, habits, and reading practices of its lively world of print media.”—Gordon Turnbull, General Editor, The Yale Editions of the Private Papers of James Boswell