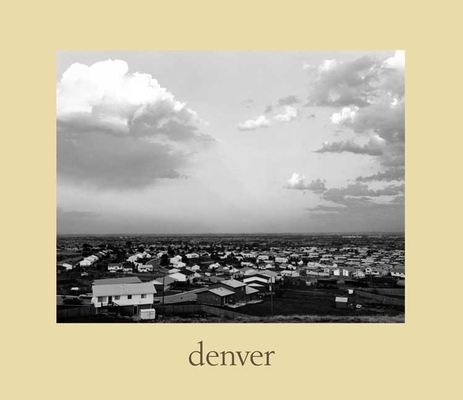 A Photographic Survey of the Metropolitan Area, 1970-1974

denver and What We Bought, together with The New West, form a loose trilogy of Robert Adams’s work exploring the rapidly developing landscape of the Denver metropolitan area from 1968 through 1974. In the former two books, Adams created a comprehensive document that was resolute in its avoidance of romantic notions of the American West and dispassionately honest about man’s despoliation of the land. Both books demonstrate the artist at the height of his powers as a documentary photographer and a poetic sequencer of images.

The photographs featured in denver and What We Bought show tract housing with mountain ranges in the distance, trailer lots devoid of people, suburban streets through generic windows, shopping mall interiors, and parking lots: subjects distinctly unspectacular, familiar, and banal. Adams’s compositions are straightforward and democratic, and it is this precise turn from sentimentality that has made Adams one of the most influential figures in the history of American photography.

These exquisite new editions, printed in rich tritones, celebrate this landmark work. denver also includes new and previously unpublished photographs from the project, chosen and sequenced by Adams himself.


Praise For denver: A Photographic Survey of the Metropolitan Area, 1970-1974…

"The photographs, taken together, are a small masterpiece of both intellect and vision."--Afterimage (reviewing Denver and What We Bought)
— Afterimage

“Adams's work is an antidote . . . a lesson in caring about the places we live and the land we use, in all their failings and glory.”—Aaron Rothman, Design Observer
— Aaron Rothman

Robert Adams (b. 1937) lives and works in northwestern Oregon. His art has been the subject of exhibitions at museums throughout the United States; a major traveling retrospective, organized by the Yale University Art Gallery, will run from 2010 to 2012.