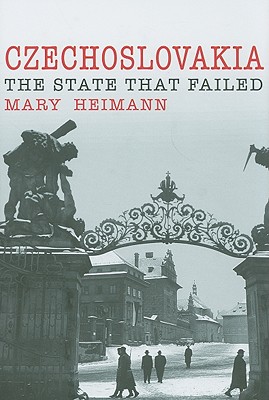 The State That Failed

This book, the most thoroughly researched and accurate history of Czechoslovakia to appear in English, tells the story of the country from its founding in 1918 to partition in 1992—from fledgling democracy through Nazi occupation, Communist rule, and invasion by the Soviet Union to, at last, democracy again.

The common Western view of Czechoslovakia has been that of a small nation that was sacrificed at Munich in 1938 and betrayed to the Soviets in 1948, and which rebelled heroically against the repression of the Soviet Union during the Prague Spring of 1968. Mary Heimann dispels these myths and shows how intolerant nationalism and an unhelpful sense of victimhood led Czech and Slovak authorities to discriminate against minorities, compete with the Nazis to persecute Jews and Gypsies, and pave the way for the Communist police state. She also reveals Alexander Dubcek, held to be a national hero and standard-bearer for democracy, to be an unprincipled apparatchik. Well written, revisionist, and accessible, this groundbreaking book should become the standard history of Czechoslovakia for years to come.

Mary Heimann is Senior Lecturer in History at the University of Strathclyde, Scotland.

Praise For Czechoslovakia: The State That Failed…

"This is truly a history of Czechoslovakia, not just of Czechs and Slovaks in the twentieth century."—Kieran Williams, The Times Literary Supplement

''Mary Heimann''s history of Czechoslovakia is both a supremely competent and detailed narrative account of the short life of a central European state and a brilliant piece of iconoclasm…This book is a fascinating study of the enduring importance of nationalism and an eye-opening expose of the myths behind received historical wisdom. It is essential reading for anyone interested in 20th century central European history.''—Paul Anderson, Tribune
-Paul Anderson