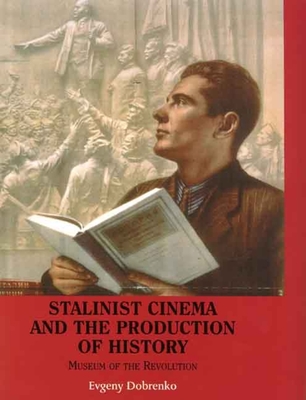 Stalinist Cinema and the Production of History

Museum of the Revolution

This engrossing book explores the important role played by Stalinist cinema in legitimizing Stalinism and producing a new Soviet identity.

Evgeny Dobrenko, a leading scholar of Soviet cultural history, asserts that both Lenin and Stalin valued cinema as the most effective form of propaganda and “organization of the masses.” Dobrenko looks at Stalinist historical films and the novels from which they drew and shows that they transformed the experience and trauma of the past into a legitimizing historical narrative—the basis of a new mythology. He examines the works of the great film directors of the revolutionary period in Stalinist cinema—including Sergei Eisenstein, Vsevolod Pudovkin, Grigorii Kozintsev, Leonid Trauberg, Fridrikh Ermler, Mark Donskoi, and Mikhail Romm—and explains how they worked with time, the past, and memory to construct the Soviet political imagination.


Praise For Stalinist Cinema and the Production of History: Museum of the Revolution…

“This is a major study of the place of Soviet film within the Soviet cultural system. Specialists in the history of Russian film and culture will find it an indispensable resource.”—Jeff Brooks, The Johns Hopkins University
— Jeff Brooks

“This is essential reading for all those interested in Soviet film. Dobrenko with his fresh approach and non-standard mix of examples confounds many of the clichés about the subject.”—Katerina Clark, Yale University
— Katerina Clark

“Professor Dobrenko's absorbing new study of Stalin period cinema shows how films set in the past, from historical epics to versions of literary classics to narratives of the Revolutionary struggle were required to adapt 'history' to the evolving political demands of the present. Witty and nuanced, drawing on a broad range of sources, the book combines unprecedented attention to hitherto neglected films with exciting new insights into classics of Soviet cinema.”—Julian Graffy, University College London
— Julian Graffy

"Dobrenko’s study further serves as a cautionary tale about the uses and abuses of history . . . historians from other fields engaged in questions of how cinema influences the historical record should take note of this book."—Anne Eakin Moss, Journal of Modern History
— Anne Eakin Moss

Evgeny Dobrenko is professor of Russian and Slavonic Studies at the University of Sheffield. He is the author of Political Economy of Socialist Realism and co-editor with Katerina Clark of Soviet Culture and Power, both published by Yale University Press. He lives in Sheffield, UK.