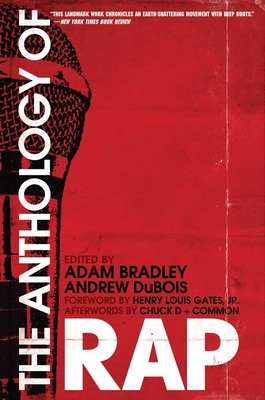 The Anthology of Rap

From the school yards of the South Bronx to the tops of the Billboard charts, rap has emerged as one of the most influential musical and cultural forces of our time. In The Anthology of Rap, editors Adam Bradley and Andrew DuBois explore rap as a literary form, demonstrating that rap is also a wide-reaching and vital poetic tradition born of beats and rhymes.

This pioneering anthology brings together more than three hundred rap and hip-hop lyrics written over thirty years, from the “old school” to the “golden age” to the present day. Rather than aim for encyclopedic coverage, Bradley and DuBois render through examples the richness and diversity of rap’s poetic tradition. They feature both classic lyrics that helped define the genre, including Grandmaster Flash & the Furious Five’s “The Message” and Eric B. & Rakim’s “Microphone Fiend,” as well as lesser-known gems like Blackalicious’s “Alphabet Aerobics” and Jean Grae’s “Hater’s Anthem.”

Both a fan’s guide and a resource for the uninitiated, The Anthology of Rap showcases the inventiveness and vitality of rap’s lyrical art. The volume also features an overview of rap poetics and the forces that shaped each period in rap’s historical development, as well as a foreword by Henry Louis Gates, Jr., and afterwords by Chuck D and Common. Enter the Anthology to experience the full range of rap’s artistry and discover a rich poetic tradition hiding in plain sight.


Praise For The Anthology of Rap…

"As ambitious and intelligent as anyone might want, and more enjoyable than anyone might think. . . . If you want to hear how the latter part of the twentieth century sounded, you can't do better than this book."—Kevin Young, Bookforum

"The authors have built a poignant collection of rhythm and rhyme. . . . For hard-core hip-hop heads, this book confirms what we have always known: that some of the most innovative writing hails from the imagination of the rapper."—Idris Goodwin, The Boston Globe

"Intelligent and authentic . . . written for both the hip-hop head and the uninitiated."—James Johnson, Philadelphia Inquirer

"For the reader who’s really interested in modern poetics a profitable week or three could be spent sitting with The Anthology of Rap."—Will Self, The Times

"The editors have been bold and often brilliant. . . . The Anthology of Rap is as ambitious and intelligent as anyone might want, and more enjoyable than anyone might think. . . . If you want to hear how the latter part of the twentieth century sounded, you can't do better than this book."—Kevin Young, Bookforum

"A chronology of rap that highlights significant figures in its short history and offers a window into how rappers harmonize the world through a distinct form of self-expression."—Library Journal

"An English major's hip-hop bible, an impossible fusion of street cred and book learning . . . Reading The Anthology of Rap was the most fun I've had with a book in many months: It just kept pouring out new waves of creativity, personality, and intelligence."—Sam Anderson, New York Magazine

"A complete encyclopedia of the history, personalities, beats, rhythm and rhymes of the musical genre from the old school of Grand Master Flash & The Furious Five to hip-hop and Kanye West."—Los Angeles Times

"The Anthology of Rap is among the best books of its kind ever published."—Dan Chiasson, The New York Review of Books

"What could have been an insufferable rap-snob collectible ended up being one of the first truly encyclopedic, essential anthologies on the form . . . It's an Ivy League master class in the language of hip-hop. Register today."—Foster Kamer, The Village Voice (Best Books of 2010)

"An awesome compilation: 920 pages of some of the baddest, phattest, flyist tracks ever dropped."—Mother Jones

"Listen along on YouTube and it's a self-taught class on the genre's history."—New York Magazine

"This mega-anthology strips away rap's performance elements and allows the language itself to pulse, break, spin, and strut in poems of audacity, outrage, insight, sweetness, and nastiness. . . . Electrifying."—Booklist

"An English major's hip-hop bible, an impossible fusion of street cred and book learning. . . . Reading [it] was the most fun I've had with a book in many months."—Sam Anderson, New York Magazine


"The Anthology of Rap reaffirms the enduring force of the written word—or at least the immaculately constructed freestyle."—LA Weekly

"The eye-opening essay by [Henry Louis] Gates . . . provides deep historical context for rap; it alone makes the book worth owning."—Slate

"A great, necessary addition to the book collection of any contemporary music aficionado."—Creative Loafing

"Reading The Anthology of Rap, which covers everything from Afrika Bambaataa to Young Jeezy, it's hard not to appreciate rap's astounding love of words, of the way they fit together and play off each other, and of how meaning can be layered upon meaning to get at a deeper truth. Which sounds an awful lot like poetry."—Joshua Ostroff, The Globe and Mail

"[The Anthology of Rap] makes the case for the immediate and enduring relevance of [rap's] poetic tradition."—Barnes and Noble Review

"[The] editors of The Anthology of Rap supply a much needed injection of energy and enthusiasm into our analysis of hip-hop's lyricism."—Quentin B. Huff,PopMatters

"[The] anthology offers the good, the bad, and the offensive—and plenty of food for intelligent discussion."—Minneapolis Star Tribune

"This thrilling (but controversial) textual monument to a thrilling (but controversial) oral tradition wrestles the genre's greatest lyricists out of the airwaves and into cold print . . . [It] enables something wonderful: the ability to sit in perfect silence and roll around in, for example, the lust Keatsian soundplay of Jay-Z."—Sam Anderson, New York Magazine, "The Year in Books"

"An exquisite display of the artistic talent seen with rap music."—Boston Music Spotlight

Honorable mention in the Compilations/Anthologies category of the 2010 New England Book Festival, given by the JM Northern Media family of festivals

"An essential contribution to our living literary tradition . . . This groundbreaking anthology masterfully assembles part of a new vanguard of American poetry."—from the Foreword by Henry Louis Gates, Jr.

"What you hold in your hands is more than a book. This is a culture. This is hip-hop . . . This book offers a view of rap in full, from the root to the fruit."—from the Afterword by Common

"Every great literature deserves a great anthology. Rap finally has its own."—from the Afterword by Chuck D

"From the Sing Song cadence of the slave preachers to the emotional bravery of Tupac Shakur to the clarity of Queen Latifah . . . for all the hearts and heads and voices who have still to be heard: We Now Have an Encyclopedia. Good for us. Much needed. Much needed."—Nikki Giovanni

"The Anthology of Rap is an instant classic. It brings together the lyric poetry of some of the greatest artists of our time. Hip Hop is here to stay and rap lives forever—on the stage and now on the page!"—Cornel West