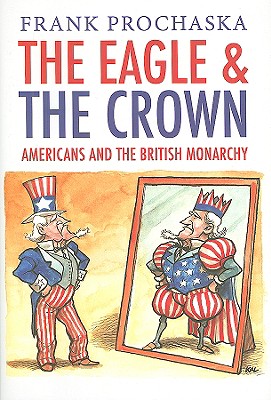 The Eagle and the Crown

Americans and the British Monarchy

This book tells the intriguing and paradoxical story of a nation that overthrew British rule only to become fascinated by the glamor of its royal family. Examining American attitudes toward British royalty from the Revolutionary period to the death of Princess Diana, "The Eagle and the Crown "penetrates the royal legacy in American politics, culture, and national self-image.Frank Prochaska argues that the United States is not only beguiled by the British monarchy but has itself considered the idea of a presidency assuming many of the characteristics of a monarchy. He shows that America's Founding Fathers created what Teddy Roosevelt later called an elective king in the office of the president, conferring quasi-regal status on the occupant of the Oval Office. Prochaska also contends that members of the British royal family who visit the United States have been key players in the emergence of America's obsession with celebrity. America's complex relationship with the British monarchy has for more than two hundred years been part of the nation's conversation about itself, a conversation that Prochaska explores with wit and panache.

Praise For The Eagle and the Crown: Americans and the British Monarchy…

"The Eagle and the Crown is a remarkably concise . . . probing study of the dynamic relationship between English royalty and American democracy. . . . It is clear from Mr. Prochaska''s insightful scholarship that a confluence of interests has played a major role in the comity between the two nations.—Martin Rubin, Wall Street Journal
-Martin Rubin

"A wide-ranging survey of America''s fascination with the British royal family. . . . A well-written and engaging narrative."—The Historian

Frank Prochaska is lecturer and senior research scholar in the Department of History, Yale University, and author of "Royal Bounty: The Making of a Welfare Monarchy," published by Yale University Press. He lives in New Haven, CT.
Loading...
or
Not Currently Available for Direct Purchase