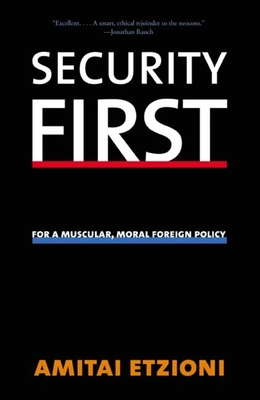 The need for drastic change in American foreign policy is clear, argues Etzioni, and he proposes an approach that is both pragmatic and morally sound

“Rarely have more profound changes in American foreign policy been called for than today,” begins Amitai Etzioni in the preface to this book. Yet Etzioni’s concern is not to lay blame for past mistakes but to address the future: What can now be done to improve U.S. relations with the rest of the world? What should American policies be toward recently liberated countries such as Iraq and Afghanistan, or rogue states like North Korea and Iran? When should the United States undertake humanitarian intervention abroad? What must be done to protect America from nuclear terrorism? The author asserts that providing basic security must be the first priority in all foreign policy considerations, even ahead of efforts to democratize. He sets out essential guidelines for a foreign policy that makes sense in the real world, builds on moral principles, and creates the possibility of establishing positive relationships with Muslim nations and all others. Etzioni has considered the issues deeply and for many years. His conclusions fall into no neat categories—neither “liberal” nor “conservative”—for he is guided not by ideology but by empirical evidence and moral deliberation. His proposal rings with the sound of reason, and this important book belongs on the reading list of every concerned leader, policy maker, and voter in America.

Amitai Etzioni is a Professor of International Relations at the George Washington University. Among his books are From Empire to Community, Political Unification Revisited, Winning Without War, and The Common Good. He served as a Senior Aid to the White House and as President of the American Sociological Association. He taught at Columbia, Harvard, and Berkeley. He was listed as one of the top 100 American intellectuals in Richard Posner’s book Public Intellectuals.
Loading...
or support indie stores by buying on