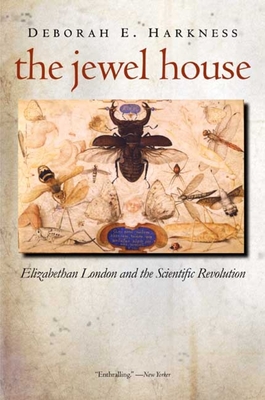 Not just a few elite scientists, but Londoners from all walks of life--lawyers, prisoners, midwives, merchants--participated in the scientific community of Elizabethan times

Bestselling author Deborah Harkness (A Discovery of Witches, Shadow of Night) explores the streets, shops, back alleys, and gardens of Elizabethan London, where a boisterous and diverse group of men and women shared a keen interest in the study of nature. These assorted merchants, gardeners, barber-surgeons, midwives, instrument makers, mathematics teachers, engineers, alchemists, and other experimenters, she contends, formed a patchwork scientific community whose practices set the stage for the Scientific Revolution. While Francis Bacon has been widely regarded as the father of modern science, scores of his London contemporaries also deserve a share in this distinction. It was their collaborative, yet often contentious, ethos that helped to develop the ideals of modern scientific research.

The book examines six particularly fascinating episodes of scientific inquiry and dispute in sixteenth-century London, bringing to life the individuals involved and the challenges they faced. These men and women experimented and invented, argued and competed, waged wars in the press, and struggled to understand the complexities of the natural world. Together their stories illuminate the blind alleys and surprising twists and turns taken as medieval philosophy gave way to the empirical, experimental culture that became a hallmark of the Scientific Revolution.


Praise For The Jewel House: Elizabethan London and the Scientific Revolution…

"Harkness's research is revelatory and her taste for the offbeat enthralling."—New Yorker

". . . Harkness has written a truly wonderful book, deeply researched, full of original material, and exhilarating to read. Its grown-up realism puts to shame the glamorised pap currently spooned out on film and television as a depiction of 16th-century England."—John Carey, The Sunday Times

"Through a deft navigation of printed book and manuscript records . . . Harkness’s  book succeeds in evoking a city alive with the pursuit of the natural world, a pursuit infused with objects, ideas and people from foreign lands . . . she listened to the archives, established rapport with these sources, traced the connections between practitioners, and mapped the concepts of science and community in Elizabethan London."–Lauren Kassell, Times Educational Supplement

"Engaging. . . . In a series of case studies, Harkness examines evolving communities of Elizabethan students of nature. The themes of competition and collaboration, print culture and manuscript networks, useful knowledge, and a cosmopolitan and urban sensibility unite impeccably researched episodes."—Science

"Marvelous. . . . Engaging, thought-provoking reading. . . . One gets a wonderful sense of the time and place. . . . This work will be a necessary part of any future discussion of Elizabethan science. . . . Highly recommended."—Choice

"Harkness's writing is impressively accessible, making for one of the most readable books in the history of science and a rare treat for specialists and amateurs alike. . . . This is an inviting and enjoyable book that provides an eye-opening introduction to the narrow streets and broad minds of Elizabethan London and encourages us to think about the pursuit of natural knowledge as a long-term, social activity that binds rather than divides the early modern and the modern worlds."—Allison Kavey, Chemical Heritage

"This jewel of a book deserves to become required reading for all students of early modern science. . . . The Jewel House is packed with new information."—Penelope Gouk, Isis

"Harkness takes her readers beyond notable figures of the Scientific Revolution into the corners, streets, homes, prisons, and workshops of London, to show us the social foundations of the early scientific revolution. . . . This is a very important book."—Antonio Barrera-Osorio, Journal of British Studies

"Based on an impressive command of archival, print, and manuscript sources, Harkness paints compelling and humane portraits of a large number of minor or largely unknown scientific practitioners. Not only is this volume a delight to read, but it convinces as good historical discussions should: through the overwhelming weight of meticulously assembled evidence. . . . The Jewel House will be essential reading for any student of premodern science for some time. It makes valuable and timely contributions to the history of science both in its larger arguments and in its rich and detailed examination of individual scientific practitioners and the world in which they lived."—Frank Klaasen, Canadian Journal of History

"Harkness' rich descriptive study of this seething community of practitioners and students of nature provides a vital and original picture of a community of scientists whose existence was obscured by later developments in the history and historiography of science. Harkness has broadened the well-trodden path of the social history of science in a way that will challenge and shape any future efforts to describe the emergence of the Scientific Revolution. . . . [A] splendid book."—Lisa T. Sarasohn, Project Muse

"A fascinating account of the worlds of late-sixteenth-century claimants to knowledge, both practical and speculative, in the London of the young Francis Bacon."—Peter R. Dear, Technology and Culture

". . . Harkness has written a rich and detailed history of scientific practice and provides a fascinating look a the culture of science in Elizabethan London."—Michael R. Lynn, Sixteenth Century Journal

". . . a delight to read . . . convinces as good historical discussions should: through the overwhelming weight of meticulously assembled evidence. . . . essential reading for any student of premodern science. It makes valuable and timely contributions to the history of science . . ."—Frank Klaasen, Canadian Journal of History


". . . vital and original. . . . Harkness has broadened the well-trodden path of the social history of science in a way that will challenge and shape any future efforts to describe the emergence of the Scientific Revolution. . . . [A] splendid book."—Lisa T. Sarasohn, Project Muse


". . . a rich and fascinating overview of the wide range of Londoners who were energetically investigating nature in the Elizabethan era."—Robert Shephard, Historian

"This is the book on Elizabethan science everyone should read. Not only does it offer a convincing reinterpretation of the role of science in society, but it is written in an arresting style, jaunty, full of illuminating anecdotes, and widely accessible."—Ian Archer, Oxford University


"This is a wonderful book, full of fascinating detail and stories from a lost world. It will have wide circulation among historians of science and technology, historians of England, and cultural historians in general."—Pamela Smith, Columbia University

"The Jewel House of Art and Nature is by far the finest exploration ever undertaken of scientific culture in an early modern metropolis. Vivid, compelling, and panoramic, this revelatory work will force us to revise everything we thought we knew about Renaissance science."—Adrian Johns, author of The Nature of the Book

"In this vivid portrait of the scientific practitioners of Elizabethan London, Deborah Harkness draws on extensive archival research to portray the city as a crucial source of social and scientific innovation and inspiration to Francis Bacon."—Ann Blair, Harvard University


"Deborah E. Harkness's The Jewel House: Elizabethan London and the Scientific Revolution is a finely written and informative book. . . . No one interested in the life of Elizabethan London . . . will find it less than engrossing."—Gordon Teskey, SEL Studies in English Literature

Deborah E. Harkness is professor of history, University of Southern California. She is the author of John Dee’s Conversations with Angels: Cabala, Alchemy, and the End of Nature and of the New York Times bestseller A Discovery of Witches.
Loading...
or
Not Currently Available for Direct Purchase