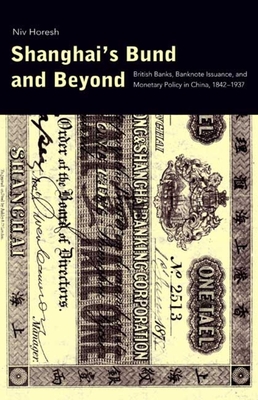 Shanghai's Bund and Beyond

As China emerges as a global powerhouse, this timely book examines its economic past and the shaping of its financial institutions. The first comparative study of foreign banking in prewar China, the book surveys the impact of British overseas bank notes on China's economy before the outbreak of the Sino-Japanese War in 1937. Focusing on the two leading British banks in the region, it assesses the favorable and unfavorable effects of the British presence in China, with particular emphasis on Shanghai, and traces instructive links between the changing political climate and banknote circulation volumes.

Drawing on recently declassified archival materials, Niv Horesh revises previous assumptions about China's prewar economy, including the extent of foreign banknote circulation and the economic significance of the May Thirtieth Movement of 1925.


Praise For Shanghai's Bund and Beyond: British Banks, Banknote Issuance, and Monetary Policy in China, 1842-1937 (Yale Series in Economic and Financial History)…

“Previous English-language works on foreign banking in China are either hopelessly out of date or 'corporate-sponsored' histories without sharp analytical focus.  As such, this incisive new book will stand alone as a thoughtful treatment of this important subject.”— Brett Sheehan, University of Southern California, and author of Trust in Troubled Times: Money, Banks and State-Society Relations in Republican Tianjin

"Niv Horesh breaks new ground with this book on the prewar Chinese economy. . . . Horesh corrects some of the distortions that have appeared in literature on the operations of foreign banks in China."—Linsun Cheng, Business History Review
— Linsun Cheng