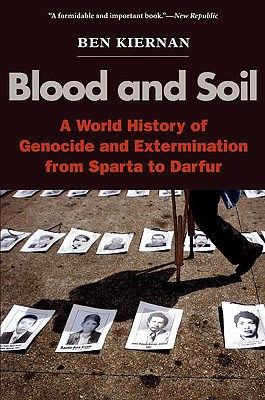 A World History of Genocide and Extermination from Sparta to Darfur

For thirty years Ben Kiernan has been deeply involved in the study of genocide and crimes against humanity. He has played a key role in unearthing confidential documentation of the atrocities committed by the Khmer Rouge. His writings have transformed our understanding not only of twentieth-century Cambodia but also of the historical phenomenon of genocide. This new book—the first global history of genocide and extermination from ancient times—is among his most important achievements. Kiernan examines outbreaks of mass violence from the classical era to the present, focusing on worldwide colonial exterminations and twentieth-century case studies including the Armenian genocide, the Nazi Holocaust, Stalin’s mass murders, and the Cambodian and Rwandan genocides. He identifies connections, patterns, and features that in nearly every case gave early warning of the catastrophe to come: racism or religious prejudice, territorial expansionism, and cults of antiquity and agrarianism. The ideologies that have motivated perpetrators of mass killings in the past persist in our new century, says Kiernan. He urges that we heed the rich historical evidence with its telltale signs for predicting and preventing future genocides.

Ben Kiernan is the A. Whitney Griswold Professor of History, professor of international and area studies, and the founding director of the Genocide Studies Program at Yale University (www.yale.edu/gsp). His previous books include How Pol Pot Came to Power: Colonialism, Nationalism, and Communism in Cambodia, 1930–1975 and The Pol Pot Regime: Race, Power, and Genocide in Cambodia under the Khmer Rouge, 1975-1979, published by Yale University Press.


Praise For Blood and Soil: A World History of Genocide and Extermination from Sparta to Darfur…

"Humans have been slaughtering each other for thousands of years, but only now is the field of genocide studies blooming. This grim account of history notes remarkable parallels in the patterns of mass slaughter, from Carthage to Darfur. With references to the genocides sanctioned by the Bible, it's ghastly reading. Yet you also can't help feeling a measure of progress over the centuries. Today, we're still far too passive about stopping genocide, but even those leaders who engage in it tend to be embarrassed, rather than boastful."—Nicholas D. Kristof, New-York Historical Society series "Books That Matter," New York Times Book Review
"A great advancement has been made by Ben Kiernan's monumental new book, Blood and Soil. . . . The author's perspective is global and he is interested in genocide before the twentieth century. . . . This is a comparative and temporal vision that only the world history approach can provide."—A. Dirk Moses, The Online Encyclopedia of Mass Violence
"Illuminatingly put together, well-narrated and lucidly discussed. A comparison that comes to my mind is James Frazer's The Golden Bough. As was the case with that great classic, no scholar in the field has previously brought together such a wealth of diverse material and imposed consistent order upon it . . . Kiernan brings order—region by region, era by era, reich by reich—to the appalling catalogue of atrocity that he so impressively commands. Moreover, he does so in plain, straightforward, informative prose. . . . This is pioneering work. . . . He has signposted a way towards a global understanding of the curse of genocide. As such, this book could eventually contribute to the saving of lives—possibly countless lives. No other work in the humanities can aspire to that. This is a major achievement."—Patrick Wolfe, Melbourne Age
"Remarkable but harrowing . . . the author is forever splicing unexpected and illuminating primary-source threads."—Stephen Saunders, Canberra Times

"Kiernan has put a prodigious amount of research into this book, particularly on the colonial massacres, andhe has made a significant contribution to an increasingly important debate."—Tim Johnson, The Australian

"With this book, [Kiernan] examines genocide globally, venturing a framework by which genocide may be recognized and analyzed. . . . Covering instances of genocide on every continent . . . Kiernan notes haunting continuities across cultures and time periods. . . . A bold and substantial work of unprecedented scope, this book is international history at its best."—Booklist

"Ben Kiernan's Blood and Soil, a meticulous new study of this most slippery of criminal categories . . . highlights the contrast between our conventional and our legalistic definition of genocide by choosing case studies that, with few exceptions, attain the highest standard of vileness. . . . The chapters on the least known of the genocides offer particular value as introductions to overlooked regional histories, and the material on the Nazis and Ottoman Turks nicely situate both those groups within larger contexts of ethnic violence. Each case is written sharply enough to escape the aroma of potted history that sometimes afflicts comparative studies of this type."—Graeme Wood, New York Sun

"Ben Kiernan has provided the most extensive history of our genocidal propensities that I have ever read. He starts his history early, with Roman and Greek massacres of barbarians, and works through the Spanish conquest of the Americas, the exterminating vigor of American settlers toward Indians, the Turkish way with the Armenians, the German way with the Jews, Stalin's way with the Ukrainians, the Khmer Rouge's way with the Cambodians, the Serbs' way with the Muslims, the Hutus' way with the Tutsis, and the Sudanese way with the Darfurians. If you want to know how it was done, where and when it was done, and how many victims there were, Kiernan has the answers. This is a formidable and important book."—Michael Ignatieff, New Republic

"A major research work and reference. . . . An important resource for those interested in studying genocide and in helping to prevent genocide."—George W. Doherty, PsycCRITIQUES
"The dismal record of lethal violence that Blood and Soil presents to its readers is therefore a corrective to my own long-standing preference for emphasizing cooperation . . . Surely a well-balanced history of the subtle connections of human cooperation and violence is what we should aim for; and I fear that my books fall short of that ideal. So, despite all my reservations about Blood and Soil, I owe Ben Kiernan a considerable debt."—William H. McNeill, New York Review of Books
"Astonishingly broad, well-documented. . . . A landmark in the study of genocide."—Daniel Chirot, Comparative Political Studies
"Kiernan is especially qualified to have undertaken such a pioneering work. He is founding director of the Genocide Studies Program at Yale University and has written or edited more than a half-dozen previous books on the Cambodian genocide of the 1970s. That period is discussed in this book along with many other efforts to eliminate racial, ethnic or religious groups, but the most extensive chapters are the ones dealing with settlers campaigns of genocide against native peoples in the Americas and Australia . . . it would be a positive step for standard high school textbooks to acknowledge the genocidal campaigns against Native Americans just as they have done regarding slavery."—Darrell Turner, National Catholic Reporter
"Kiernan is one of the leading scholars on Cambodian history, particularly the regime of Pol Pot and the genocide committed by the Khmer Rouge. . . . Both because of his academic credentials and the scope of the work Blood and Soil is a must-read book. While it is not without its flaws or unchallengeable in some of its arguments, it is a book that will become the center of much discussion in the coming months and years. Kiernan's book should be read by anyone who wants to get a better handle to the historical scope of genocide. The chapter on the genocidal actions taken against Native Americans is a phenomenal chapter."—J.D. Bowers, E-Wareness!, Genocide and Human Rights Institute

"To learn from the tragedies and mistakes of the past . . .  [is] an idea central to Ben Kiernan's massive Blood and Soil. . . . Kiernan details not only the Armenian genocide but also the numerous mass murders that took place before and since in eras and regions synonymous with the terrible events that line our history books. . . . Kiernan's explorations of genocide in the 19th-century Australian Outback and the formative years of East and Southeast Asia illuminate periods of genocidal history often overshadowed by the more mechanized and publicized mass killings of the 20th century. . . . The personalized accounts of witnesses remind us—as all worthwhile studies of human disaster should—of the individual human lives underneath all these millennia of collective death and destruction."—Zak M. Salih, Baltimore City Paper

"In exploring the global 'prehistory' of the horrific forms of societal violence usually associated with the twentieth century, Kiernan identifies key factors that have been consistently associated with genocidal episodes. His book makes an original contribution to our understanding of the phenomenon."—Michael Adas, Rutgers University

"Ben Kiernan’s Blood and Soil is a major work explaining myths and metaphors that have underwritten genocide for six hundred years—earlier within the bowels of the western tradition; now commonplace practice far beyond that tradition. In seeing genocide as linked to issues of land as well as race, nation, and expansion, Kiernan has opened up social, political, and economic analysis to the struggle for land and the control of property. Such an approach is unique as it is provocative. It is inspired by the author’s profound reading of Cambodia and Southeast Asia. Blood and Soil provides an angle of vision rarely found in those who start (and stop) with a European base of scholarship. The book opens up new questions and formulations on the nature of state inspired murder. It merits a close reading of the dark side of terror, often commented upon, but rarely probed."—Irving Louis Horowitz, Rutgers University

"Blood and Soil is a stunning achievement. The idea for the project was clearly a prompting of the heart, but the argument itself is a thing of pure intellect. It surveys thousands of years, visits every corner of the world, and stares with scarcely a blink at the worst horrors the world has ever known. As an act of scholarship, it simply stands alone."—Kai Erikson, Yale University

"Ben Kiernan’s book is a major contribution to genocide studies—a first attempt to tell the history of genocidal events, from Sparta to Darfur, Blood and Soil is a well-researched, detailed account of many instances of mass killings and the reasons for their occurrence. It will no doubt give rise to controversy, new research, and new insights."—Yehuda Bauer, Yad Vashem