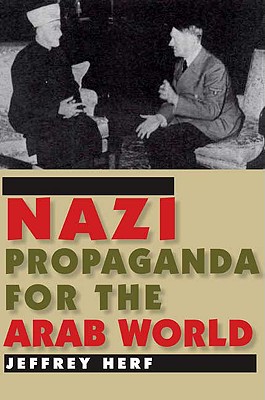 Jeffrey Herf, a leading scholar in the field, offers the most extensive examination to date of Nazi propaganda activities targeting Arabs and Muslims in the Middle East during World War II and the Holocaust. He draws extensively on previously unused and little-known archival resources, including the shocking transcriptions of the Axis Broadcasts in Arabic radio programs, which convey a strongly anti-Semitic message.

Herf explores the intellectual, political, and cultural context in which German and European radical anti-Semitism was found to resonate with similar views rooted in a selective appropriation of the traditions of Islam. Pro-Nazi Arab exiles in wartime Berlin, including Haj el-Husseini and Rashid el-Kilani, collaborated with the Nazis in constructing their Middle East propaganda campaign. By integrating the political and military history of the war in the Middle East with the intellectual and cultural dimensions of the propagandistic diffusion of Nazi ideology, Herf offers the most thorough examination to date of this important chapter in the history of World War II. Importantly, he also shows how the anti-Semitism promoted by the Nazi propaganda effort contributed to the anti-Semitism exhibited by adherents of radical forms of Islam in the Middle East today.

Jeffrey Herf is a Professor in the Department of History at the University of Maryland in College Park.

Praise For Nazi Propaganda for the Arab World…

“Jeffrey Herf provides a vivid history of Nazi propaganda in the Middle East by using an array of newly discovered sources. He not only demonstrates the geographical reach of Nazi Germany''s rhetoric and intentions in its apocalyptic war against the Jews, but also provides important suggestions regarding the development of contemporary anti-Semitism in the Muslim world.  A must read for both historians of the Holocaust and those interested in the Middle East conflict.”—Norman Goda, author of Tales from Spandau: Nazi Criminals and the Cold War

"Nazi Propaganda for the Arab World is a work of great research and clear writing. Through archival sleuthing, Herf has discovered a previously unknown but crucial chapter in the rise of modern anti-Semitism in the Arab world. He shows how Nazi propaganda harnessed European and indigenous anti-Semitism to form a lethal form of racism. The result continues to poison the Middle East''s intellectual life today and has helped fuel a virulent opposition to modernity that haunts us today."—Ian Johnson, author of A Mosque in Munich
-Ian Johnson

"Herf is a prominent scholar in and is a member of a tiny community of experts who are both familiar with Nazi Germany and the Arab world; so no one like Herf is in a position to complete such a well-founded study on the spread of Nazi propaganda in the Middle East. Herf shows how Nazis employed media in Arabic – such as short-wave radio – to win the Middle East. The dreadful impact of this propaganda has been the pan-Arab nationalist adoption of Nazi ideology. On the top of this impact is the pan-Arab adoption of Nazi anti-Semitism. Therefore, Herf’s book focuses on this issue, analyzing original materials and providing new insights. In the past decades secular pan-Arabism has been replaced by Islamism, but the German Nazi traces of anti-Semitism disclosed in the groundbreaking analysis continues to be in place, despite the Islamization of this ideology. Herf’s book is not only a historical disclosure, but also a major contribution to understanding the Middle East of today in a historical continuity."—Bassam Tibi, Cornell University

"A compelling example of the new trans-national historiography, this volume is a major contribution to the history of Nazi Germany and the prehistory of the Arab-Israeli conflict."—Russell A. Berman, Stanford University
-Russell A. Berman

"In this fascinating book, Jeffrey Herf investigates the themes, methods, and scope of Nazi propaganda in the Near East during World War Two.  He shows how Berlin achieved a synthesis of its own paranoid anti-Semitism combined with selective elements drawn from Islam in order to propagate its message of a mortal Jewish peril.  A superb achievement!"—Saul Friedlander, University of California, Los Angeles
-Saul Friedlander

"Jeffery Herf has written a convincing and powerful account of the impact of Nazi propaganda on the Middle East, throwing new light on the convergence of European and Arab-Islamic anti-Semitism."—Robert S. Wistrich, author of A Lethal Obsession: Anti-Semitism from Antiquity to the Global Jihad
-Robert S. Wistrich

"Professor Herf''s book is a thorough and important description of Nazi propaganda to the Arab world during World War II, and quite accurately and ominously highlights the parallels between Nazi anti-Semitic tenets and Islamist anti-Semitism."—Benny Morris, Ben-Gurion University
-Benny Morris

“Reading Nazi Propaganda for the Arab World is a reminder of how powerful such lies can be. . . . We have not yet heard the end of the ideas whose birth Herf documents in this frightening, necessary book.” — Adam Kirsch, TABLET


“Powerful, important. . . . Herf’s detective work in the U.S. archives has opened a new vista on the Arab-Israeli conflict and Islamism, as well as made a landmark contribution more broadly to an understanding of the modern Middle East.”--Daniel Pipes, Commentary

“[Herf’s study]. . .will hopefully make it more difficult for commentators and government officials to ignore the affinities between radical Islam and Nazi eliminationist anti-Semitism.”--Sol Stern, The New Criterion