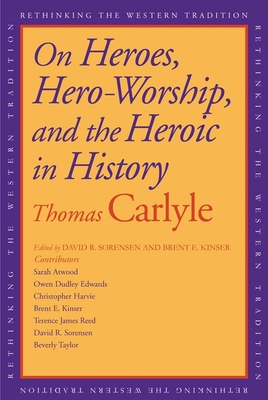 On Heroes, Hero-Worship, and the Heroic in History (Rethinking the Western Tradition)

Based on a series of lectures delivered in 1840, Thomas Carlyle’s On Heroes, Hero-Worship, and the Heroic in History considers the creation of heroes and the ways they exert heroic leadership. From the divine and prophetic (Odin and Muhammad) to the poetic (Dante and Shakespeare) to the religious (Luther and Knox) to the political (Cromwell and Napoleon), Carlyle investigates the mysterious qualities that elevate humans to cultural significance.

By situating the text in the context of six essays by distinguished scholars that reevaluate both Carlyle’s work and his ideas, David Sorensen and Brent Kinser argue that Carlyle's concept of heroism stresses the hero’s spiritual dimension. In Carlyle’s engagement with various heroic personalities, he dislodges religiosity from religion, myth from history, and truth from “quackery” as he describes the wondrous ways in which these “flowing light-fountains” unlock the heroic potential of ordinary human beings.

Praise For On Heroes, Hero-Worship, and the Heroic in History (Rethinking the Western Tradition)…

“This new edition promises to be an excellent addition to Carlyle scholarship.  It will widen the understanding of nineteenth-century literary and political thought among students of the period and lay readers alike.”—Rosemary Ashton, University College London

“On Heroes assembles a team of distinguished and world-famous authorities. They tackle head on some of the largest questions about Carlyle’s influence and reception after the lectures and, indeed, after his death.”—Francis O’Gorman, University of Leeds
— Francis O’Gorman