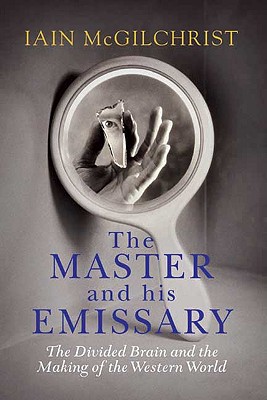 The Master and His Emissary (Hardcover)

The Divided Brain and the Making of the Western World

Why is the brain divided? The difference between right and left hemispheres has been puzzled over for centuries. In a book of unprecedented scope, Iain McGilchrist draws on a vast body of recent brain research, illustrated with case histories, to reveal that the difference is profound not just this or that function, but two whole, coherent, but incompatible ways of experiencing the world. The left hemisphere is detail oriented, prefers mechanisms to living things, and is inclined to self-interest, where the right hemisphere has greater breadth, flexibility, and generosity. This division helps explain the origins of music and language, and casts new light on the history of philosophy, as well as on some mental illnesses.

In the second part of the book, McGilchrist takes the reader on a journey through the history of Western culture, illustrating the tension between these two worlds as revealed in the thought and belief of thinkers and artists, from Aeschylus to Magritte. He argues that, despite its inferior grasp of reality, the left hemisphere is increasingly taking precedence in the modern world, with potentially disastrous consequences. This is truly a tour de force that should excite interest in a wide readership.

Iain McGilchrist is a former Fellow of All Souls College, Oxford, where he taught literature before training in medicine. He was Consultant Psychiatrist and Clinical Director at the Bethlem Royal and Maudsley Hospital, London, and has researched in neuroimaging at Johns Hopkins University, Baltimore. He now works privately in London and otherwise lives on the Isle of Skye.

Praise For The Master and His Emissary: The Divided Brain and the Making of the Western World…

"McGilchrist describes broad [intellectual] movements and famous figures as if they were battles and soldiers in a 2,500-year war between the brain’s hemispheres. . . A scintillating intelligence is at work. . ." - Economist

"A landmark new book. . . It tells a story you need to hear, of where we live now."— Bryan Appleyard, The Sunday Times
-Bryan Appleyard

"A giant in his vital field shows convincingly that the degeneracy of the West springs from our failure to manage the binary division of our brains." — Book of the Year choice, David Cox, Evening Standard

"This is a very remarkable book. . . McGilchrist, who is both an experienced psychiatrist and a shrewd philosopher, looks at the relation between our two brain-hemispheres in a new light, not just as an interesting neurological problem but as a crucial shaping factor in our culture. . . splendidly thought-provoking. . . . I couldn’t put it down."--Mary Midgley, The Guardian

"A beautifully written, erudite, fascinating, and adventurous book. It goes from the microstructure of the brain to great epochs of Western civilisation, confidently and readably. One turns its five hundred pages . . . as if it were an adventure story." — A. C. Grayling,  Literary Review

"It is no exaggeration to say that this quite remarkable book will radically change the way you understand the world and yourself. . . . It is a genuine tour de force, a monumental achievement."--David Lorimer, Scientific and Medical Network Review

"At last! A book on neuroscience that is a thrilling read, philosophically astute and with wonderful science."--Mark Vernon, Philosophy and Life blog

‘Though neurologists may well not welcome it because it asks them new questions, the rest of us will surely find it splendidly thought-provoking. And I do have to say that, fat though it is, I couldn’t put it down.’ — The London Review of Books

"To call Iain McGilchrist''s The Master and His Emissary. . . an account of brain hemispheres is to woefully misrepresent its range. McGilchrist. . . persuasively argues that our society is suffering from the consequences of an over-dominant left hemisphere losing touch with its natural regulative ''master,'' the right."-- Salley Vicker, The Guardian

"This insightful, erudite and thought-provoking examination of the brain''s hemispheres can change how you see (or think you see) the world."--PopMatters