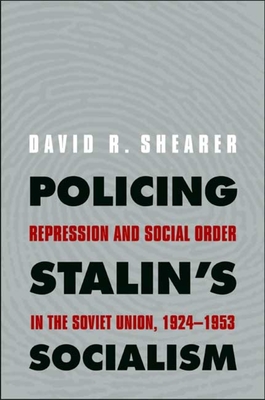 Repression and Social Order in the Soviet Union, 1924-1953 (Yale-Hoover Series on Authoritarian Regimes)

Policing Stalin’s Socialism is one of the first books to emphasize the importance of social order repression by Stalin’s Soviet regime in contrast to the traditional emphasis of historians on political repression. Based on extensive examination of new archival materials, David Shearer finds that most repression during the Stalinist dictatorship of the 1930s was against marginal social groups such as petty criminals, deviant youth, sectarians, and the unemployed and unproductive.

It was because Soviet leaders regarded social disorder as more of a danger to the state than political opposition that they instituted a new form of class war to defend themselves against this perceived threat. Despite the combined work of the political and civil police the efforts to cleanse society failed; this failure set the stage for the massive purges that decimated the country in the late 1930s.

“This is a pioneering work that radically revises traditional understandings of Stalin's terror of 1937–38. Based on a meticulous reconstruction of the dynamics and periodization of police campaigns of repression in the 1930s, Shearer demonstrates how social policing in the form of public-order campaigns determined the contour of the terror. State security and public order merged in the hunt for enemies, resulting in the massive social engineering of Soviet society. This is a major new conceptualization based on an unrivaled mastery of the sources.”—Lynne Viola, University of Toronto
— Lynne Viola

David Shearer is Associate Professor of History at the University of Delaware.
Loading...
or support indie stores by buying on