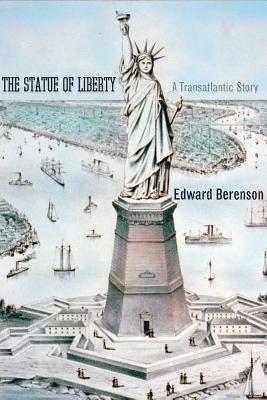 The Statue of Liberty (Hardcover)

A Transatlantic Story (Icons of America)

A stirring new history of Lady Liberty, from its creation in France to its renewed significance in the post-9/11 years

A universally recognized icon, the Statue of Liberty is perhaps the most beloved of all American symbols. Yet no one living in 1885, when the crated monument arrived in New York Harbor, could have foreseen the central place the Statue of Liberty would come to occupy in the American imagination. With the particular insights of a cultural historian and scholar of French history, Edward Berenson tells the little-known stories of the statue’s improbable beginnings, transatlantic connections, and the changing meanings it has held for each successive American generation.

Berenson begins with the French intellectuals who decided for their own domestic political reasons to pay monumental tribute to American liberty. Without any official backing, they designed the statue, announced the gift, and determined where it should go. The initial American response, not surprisingly, was less than enthusiastic, and the project had to overcome countless difficulties before the statue was at last unveiled to the public in New York Harbor in 1886. The trials of its inception and construction, however, are only half of the story. Berenson shows that the statue’s symbolically indistinct, neoclassical form has allowed Americans to interpret its meaning in diverse ways: as representing the emancipation of the slaves, Tocqueville's idea of orderly liberty, opportunity for "huddled masses," and, in the years since 9/11, the freedom and resilience of New York City and the United States in the face of terror.

Edward Berenson is professor of history, director of the Institute of French Studies, and director of the Center for International Research in Humanities and Social Sciences, New York University. His previous books include Heroes of Empire: Five Charismatic Men and the Conquest of Africa. He lives in Irvington, NY.


Praise For The Statue of Liberty: A Transatlantic Story (Icons of America)…

“Arriving shortly after the 125th anniversary of the Statue of Liberty’s dedication, Ed Berenson’s charming and eminently readable book is itself a cause for celebration. Offering fascinating insights into the origins, controversies, challenges, and achievements associated with this most familiar icon of the American dream of freedom, The Statue of Liberty reminds us that while the journey towards freedom is rarely smooth, the ever-evolving symbolic power of the Colossus of New York Harbor endures, because the aspiration for liberty is fundamental to our humanity. On 9/11, this 'mighty woman' stood as witness to devastation and mass murder; standing tall and unharmed in the harbor overlooking the wounded skyline of this great city, the statue originally envisioned as 'Liberty Enlightening the World' now takes on new meaning as a beacon of resilience and renewal.”—Alice M. Greenwald, Director, National September 11 Memorial Museum
— Alice M. Greenwald

“Who knew what a history lies behind the Statue of Liberty, winding through the American Civil War, the Paris Commune, the determination of its creator Frédéric Auguste Bartholdi and the hucksterism of Joseph Pulitzer? Edward Berenson re-creates the narrative with fascinating detail and personal warmth.”—Joyce Appleby, author of The Relentless Revolution: A History of Capitalism

“Edward Berenson’s The Statue of Liberty is cultural history at its finest. As Berenson shows with verve and discernment, the Statue of Liberty is a highly contested memory site. Thus throughout its history, the statue has functioned as a litmus test or projection screen for competing conceptions of American freedom. Artfully constructed and gracefully written, Berenson’s book is destined to become the standard work on Lady Liberty’s legacy.”—Richard Wolin, author of The Wind from the East: French Intellectuals, the Cultural Revolution, and the Legacy of the 1960s
— Richard Wolin

“This is a remarkable book because so much of the story it tells is unexpected.  Everyone thinks they know the Statue of Liberty, but they are wrong. Ed Berenson follows her surprising history from start to finish in a fast-paced and highly readable tale that never disappoints. The great colossus finds her place in nineteenth-century artistic production and technology as well as in recent popular culture and politics. Rather than ending with the statue’s unveiling, Berenson follows the story right up to the present day, showing how the Lady's meaning has changed from one generation to the next. At times humorous, at other moments elegiac, The Statue of Liberty is utterly spellbinding and a jewel of microhistorical analysis.”—Ruth Harris, author of Dreyfus: Emotion, Politics and the Scandal of the Century, winner of the Wolfson Prize
— Ruth Harris

“This important work examines not only the evolution of the statue, but the ever-evolving American relationship to freedom and immigration.  Berenson here explores the wide range of perceptions that gave the statue meaning and voice—from its very conception, through its contemporary status as a beloved (yet fraught) American icon.”—Melissa J. Martens, Museum of Jewish Heritage