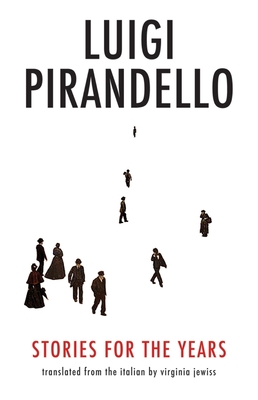 Stories for the Years (The Margellos World Republic of Letters)

A masterful collection by a literary giant of the past century, rendered by one of our most esteemed Italian translators

Regarded as one of Europe’s great modernists, Pirandello was also a master storyteller, a fine observer of the drama of daily life with a remarkable sense of the crushing burdens of class, gender, and social conventions. Set in the author’s birthplace of Sicily, where the arid terrain and isolated villages map the fragile interior world of his characters, and in Rome, where modern life threatens centuries-old traditions, these original stories are sun baked with the deep lore of Italian folktales. In “The Jar,” a broken earthenware pot pits its owner, a quarrelsome landholder, against a clever inventor of a mysterious glue. “The Dearly Departed” tells the story of a young widow and her new husband on their honeymoon, haunted at every turn by the sly visage of the deceased. The scorned lover, the despondent widow, the intransigent bureaucrat, the wretched peasant—Pirandello’s characters expose the human condition in all its fatalism, injustice, and raw beauty. For lovers of Calvino and Pasolini, these picturesque stories preserve a memory of an Italy long gone, but one whose recurring concerns still speak to us today.

"Virginia Jewiss opens up many of Pirandello's rich, humorous, tragic, always engaging and surprising worlds in these trenchant and entertaining stories."—Jonathan Galassi
“Pirandello is a master of the beguiling story that packs a frightening punch."—Tim Parks, author of Italian Ways: On and Off the Rails from Milan to Palermo
“The visionary dramatist Luigi Pirandello was also a masterful spinner of short stories that are steeped in the salt sea, bitter herbs, and ancient passions of his native Sicily. Virginia Jewiss captures the biting edge of Pirandello’s irony with perfect pitch.”—Ingrid Rowland, University of Notre Dame

“The greatest short fiction begins with narrative and moves effortlessly into archetype, achieving in a small compass an epiphany about what is quintessentially human. Jewiss has rendered Pirandello's epiphanies faithfully and triumphantly.”—Karl Kirchwey, Boston University

Luigi Pirandello (1867–1936) is one of Italy’s most significant literary figures of the last century. Virginia Jewiss, a translator of Italian literature and cinema, lives in Rome and in Washington, DC.
or support indie stores by buying on