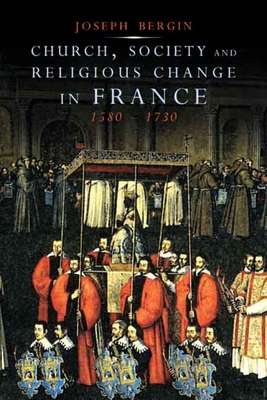 This readable and engaging book by an acclaimed historian is the only wide-ranging synthesis devoted to the French experience of religious change during the period after the wars of religion up to the early Enlightenment. Joseph Bergin provides a clear, up-to-date, and thorough account of the religious history of France in the context of social, institutional, and cultural developments during the so-called long seventeenth century.

Bergin argues that the French version of the Catholic Reformation showed a dynamism unrivaled elsewhere in Europe. The traumatic experiences of the wars of religion, the continuing search within France for heresy, and the challenge of Augustinian thought successively energized its attempts at religious change. Bergin highlights the continuing interaction of church and society and shows that while the French experience was clearly allied to its European context, its path was a distinctive one.

“Essential reading for anyone who wants to understand seventeenth-century France . . . a masterpiece.”—Michael Hayden, Canadian Journal of History

"Church, Society, and Religious Change is nothing short of the first comprehensive work in English that sets out to analyse the myriad strands of Catholic reform and renewal in France in the seventeenth-century. . . . In short, this is likely to remain the best overall analysis of French Catholic reform for some time to come. Moreover, Bergin knows and has mastered all the Franceophone scholarship on the subject. . . . This is a very impressive book, which is even greater than the sums of its many parts. It is also very readable, making it the first book to turn to on the subject for academics and non-academics alike."—Mack P. Holt, Journal of Ecclesiastical History
— Mack P. Holt

Joseph Bergin is professor of history at the University of Manchester, and a Fellow of the British Academy. His previous books include Cardinal Richelieu, The Making of the French Episcopate and Crown, Church and Episcopate under Louis XIV, all published by Yale.