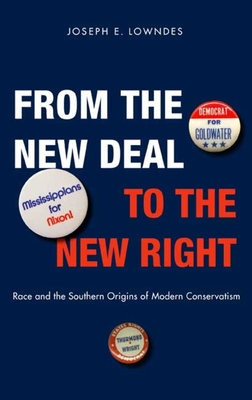 From the New Deal to the New Right

Race and the Southern Origins of Modern Conservatism

The role the South has played in contemporary conservatism is perhaps the most consequential political phenomenon of the second half of the twentieth century. The region’s transition from Democratic stronghold to Republican base has frequently been viewed as a recent occurrence, one that largely stems from a 1960s-era backlash against left-leaning social movements. But as Joseph Lowndes argues in this book, this rightward shift was not necessarily a natural response by alienated whites, but rather the result of the long-term development of an alliance between Southern segregationists and Northern conservatives, two groups who initially shared little beyond opposition to specific New Deal imperatives.

Lowndes focuses his narrative on the formative period between the end of the Second World War and the Nixon years. By looking at the 1948 Dixiecrat Revolt, the presidential campaigns of George Wallace, and popular representations of the region, he shows the many ways in which the South changed during these decades. Lowndes traces how a new alliance began to emerge by further examining the pages of the National Review and Republican party-building efforts in the South during the campaigns of Eisenhower, Goldwater, and Nixon. The unique characteristics of American conservatism were forged in the crucible of race relations in the South, he argues, and his analysis of party-building efforts, national institutions, and the innovations of particular political actors provides a keen look into the ideology of modern conservatism and the Republican Party.

Joseph E. Lowndes is assistant professor of political science, University of Oregon. He lives in Eugene.