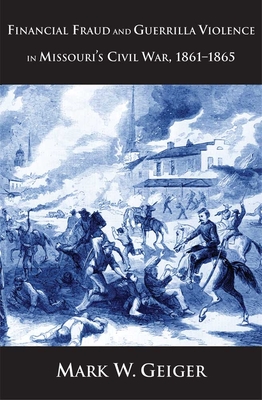 This highly original work explores a previously unknown financial conspiracy at the start of the American Civil War. The book explains the reasons for the puzzling intensity of Missouri’s guerrilla conflict, and for the state’s anomalous experience in Reconstruction. In the broader history of the war, the book reveals for the first time the nature of military mobilization in the antebellum United States.

Mark Geiger is an Honorary Research Fellow at the University of Sydney, and will also be a Kluge Fellow at the John W. Kluge Center at the Library of Congress for the 2011-12 academic year.

"In this remarkable new book, Mark Geiger uncovers an audacious financial conspiracy that has eluded previous historians, to divert funds from the banks of Missouri to arm rebel military forces at the outbreak of the Civil War.  The disastrous consequences stretched far into the postwar era, as documented by Geiger's meticulous research.  This is first-rate economic and social history, and it also happens to be a cracking good story."—Gavin Wright, author of Slavery and American Economic Development
— Gavin Wright

"This is an important book, period. Geiger persuasively explains the intensity of guerrilla conflict in Missouri. No one knew about the financial frauds that lay at the heart of Missouri's guerrilla problem until Geiger discovered the evidence of it in obscure county court records and reached his astounding conclusion: financial schemes to lend money to the Confederacy from Missouri banks bankrupted the planter aristocracy of the state and made the sons of the planters a desperate class from which to recruit the bitterest and most destructive guerrillas in America's Civil War. In short, this is one of the finest monographs on the Civil War I have read in twenty-five years."—Mark Neely, Professor of the History of the Civil War Era, Penn State University and winner of the 1992 Pulitzer Prize in history for The Fate of Liberty: Abraham Lincoln and Civil Liberties

“This study bridges financial, political, social, and Civil War history in an exciting, creative way.  Using as his jumping off point a series of law suits filed in Missouri during the Civil War to recover bank loans granted to Confederate sympathizers, Geiger is able to map the spread of both the “market revolution” and slavery through the region, shed new light on the politics of this important border state, illuminate the techniques used by both the North and the South to finance the Civil War in its early stages, and explain the unique course of the war and its aftermath in the region—the vigor of the guerilla movement in Missouri and the failure of elite planters to reestablish their dominance.”—Naomi R. Lamoreaux, Professor of Economics, History, and Law, University of California, Los Angeles

"In American memory, the Civil War was fought on fields of honor, where armies met in formal battles under such icons as Grant and Lee. But in the border state of Missouri, far from Gettysburg and Shiloh, a bitter guerrilla conflict turned neighbor against neighbor in a spiral of atrocities and martial law. Unfortunately, our understanding of that terrible episode has long been shaped by unquestioned assumptions and comforting legends—many involving Frank and Jesse James, who fought as Confederate guerrillas. Now Mark Geiger, through startlingly original research, provides a provocative new perspective on Missouri's Civil War. A fascinating study that historians will find impossible to ignore."—T.J. Stiles, author of Jesse James: Last Rebel of the Civil War and The First Tycoon: The Epic Life of Cornelius Vanderbilt, winner of the National Book Award
— T.J. Stiles

“The most original book about the Civil War in the last several years […] It was a delight to read.  This is what historians do when they're on their game.”— Gerald Prokopowicz, host of Civil War Talk Radio