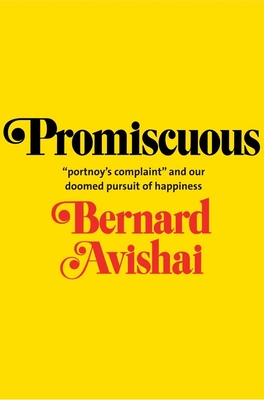 "Portnoy's Complaint" and Our Doomed Pursuit of Happiness

A spirited biography of Philip Roth's notorious novel, from the outrage it sparked to its impact on Roth to its legacy some forty years later

The publication of Portnoy’s Complaint in 1969 provoked instant, powerful reactions. It blasted Philip Roth into international fame, subjected him to unrelenting personal scrutiny and conjecture, and shocked legions of readers—some delighted, others appalled. Portnoy and other main characters became instant archetypes, and Roth himself became a touchstone for conflicting attitudes toward sexual liberation, Jewish power, political correctness, Freudian language, and bourgeois disgust. What about this book inspired Richard Lacayo of Time to describe it as “a literary instance of shock and awe,” and the Modern Library to list it among the 100 best English-language novels of the twentieth century?

Bernard Avishai offers a witty exploration of Roth’s satiric masterpiece, based on the prolific novelist's own writings, teaching notes, and personal interviews. In addition to discussing the book’s timing, rhetorical gambit, and sheer virtuousity, Avishai includes a chapter on the Jewish community’s outrage over the book and how Roth survived it, and another on the author’s scorching treatment of psychoanalysis. Avishai shows that Roth’s irreverent novel left us questioning who, or what, was the object of the satire. Hilariously, it proved the serious ways we construct fictions about ourselves and others.

Bernard Avishai is adjunct professor of business at Hebrew University and author of three books, most recently, The Hebrew Republic, and dozens of articles for The New Yorker, New York Review of Books, Harper’s, Harvard Business Review, and other publications. He divides his time between Jerusalem and Wilmot, NH.

Praise For Promiscuous: "Portnoy's Complaint" and Our Doomed Pursuit of Happiness…

“Avishai draws on existing scholarship to recount the ‘wild blue shocker’ that made Portnoy’s Complaint the talk of its time, but from Roth’s notebooks and Roth’s friendship he adds insight to what keeps Portnoy outselling Gatsby and Godfather to this day.”— Alan Cooper, Jewish Book World
— Alan Cooper

“An engaging and erudite reexamination of Portnoy’s Complaint. . . . This fine and flawed novel does, indeed, merit another look even though and maybe because, as Avishai reminds us, what seemed daring to a twenty-something in 1969 may well seem touching when he is 60.”— Glenn C. Altschuler, Jerusalem Post
— Glenn C. Altschuler

"Great poets require great audiences: Whitman's dictum is brought to life in this book, where a truly great writer is matched to a highly astute reader. Philip Roth's transcendent importance is well established, but never has it been more cogently appreciated than by Bernard Avishai, who makes Roth's early masterpiece come fully to life again. Through Avishai's eyes, Roth's genius shines. Required reading all around."—James Carroll, author of Jerusalem, Jerusalem

“Bernard Avishai has written a spirited, loving, richly insightful appreciation of Portnoy's Complaint as cultural phenomenon, generational totem, instinctual liberation, and, above all, stupendous work of art. A marvelous book for anyone who wishes to relive and to understand the thrill, scandal and triumph of Roth's comic masterpiece.”—Stephen Greenblatt, author of The Swerve: How the World Became Modern

"There are only two people who could have written this book: Philip Roth and Bernard Avishai. In fact, Avishai's deep emersion into the literary and cultural phenomenon that is Portnoy's Complaint is nearly as astute, bold, funny, perceptive, and wise as the celebrated novel itself."—Reza Aslan, Author of No god but God and Beyond Fundamentalism
— Reza Aslan

“I was there. I read Portnoy—eagerly, with both hands!—the week it came out. And let me tell you, Avishai nails it. He explains it, re-explains it, plumbs the depths and jokes and gives backstories I was too ignorant and giddy to notice. And not just that: Promiscuous kept the smile on my face from start to finish.”—Hendrik Hertzberg, Senior Editor, The New Yorker

“This is the best thing on Roth yet written. Avishai’s breezy, intimate style is propelled by considerable scholarship, not only locating this breakout novel in Roth’s life and work, but building a launching pad for Avishai’s own dazzling cultural, intellectual, religious, and psychoanalytical explorations. Promiscuous proves Roth to be our boldest, best, and brightest fiction writer. So now perhaps the Nobel Prize Committee may begin. Yes?”—Robert Brustein, Founder, American Reporatory Theater

“The brilliance and wit of Philip Roth’s novel, Portnoy’s Complaint, a book that transformed modern Jewish identity, are matched by the dazzling insights of Bernard Avishai, one of the most engaged, and smartest, Jewish writers around.”—Susannah Heschel, Eli Black Professor of Jewish Studies, Dartmouth College, author of The Aryan Jesus
— Susannah Heschel

"A spirited engagement with the 1969 breakthrough novel that brought Philip Roth both renown and notoriety. . . . Avishai ventures far and wide over literary, philosophical and other cultural touchstones, providing a context for Roth's novel that encompasses James Joyce, Samuel Beckett, Jackson Pollock, and Judd Apatow. Avishai proves both an informed and engaging guide to the novel and its legacy."—Kirkus Reviews
— Kirkus Reviews

“How can one make a text so notorious, so unrelentingly charged, even more unique than it already is? It is to Avishai’s great credit that, in many respects, he lives up to this task, not least because his prose teems with unbounded passion. He offers keen insight into a novel that one would think has exhausted further possible excavation from critics and readers alike.”—Sam Kerbel, Tablet
— Sam Kerbel

“Avishai draws on existing scholarship to recount the “wild blue shocker” that made Portnoy’s Complaint the talk of its time, but from Roth’s notebooks and Roth’s friendship he adds insight to what keeps Portnoy outselling Gatsby and Godfather to this day.”— Alan Cooper, Jewish Book World

“Avishai examines Roth’s masterpiece, including the reaction at the time of publication and over the succeeding 40 years, drawing on interviews with Roth as well as the novelist’s writing and teaching notes, and interviews with writers, friends and the therapist who inspired the character of the psychoanalyst Dr. Spielvogel.”— Toronto Globe and Mail
— Toronto Globe and Mail

“Avishai (whose intellect and wit well serve his friend Roth) is a perceptive literary and historic guide to the Portnoy phenomenon and the passionate response the novel engendered. . . . Erudite yet playful. . . . Highly recommended.”— Choice
— Choice

“[A] hectic but always informative tour . . . [that] resonantly illustrates what Portnoy—indeed, what Roth’s entire oeuvre—represents both aesthetically and ethically: the necessity of heeding and cultivating the ‘voice that can’t mock others without mocking itself.’”