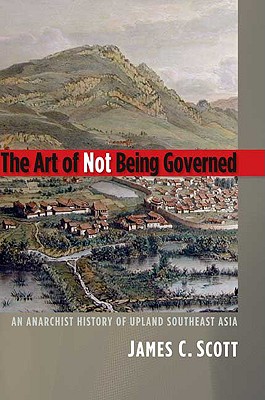 The Art of Not Being Governed

For two thousand years the disparate groups that now reside in Zomia (a mountainous region the size of Europe that consists of portions of seven Asian countries) have fled the projects of the organized state societies that surround them slavery, conscription, taxes, corvee labor, epidemics, and warfare. This book, essentially an anarchist history, is the first-ever examination of the huge literature on state-making whose author evaluates why people would deliberately and reactively remain stateless. Among the strategies employed by the people of Zomia to remain stateless are physical dispersion in rugged terrain; agricultural practices that enhance mobility; pliable ethnic identities; devotion to prophetic, millenarian leaders; and maintenance of a largely oral culture that allows them to reinvent their histories and genealogies as they move between and around states.

In accessible language, James Scott, recognized worldwide as an eminent authority in Southeast Asian, peasant, and agrarian studies, tells the story of the peoples of Zomia and their unlikely odyssey in search of self-determination. He redefines our views on Asian politics, history, demographics, and even our fundamental ideas about what constitutes civilization, and challenges us with a radically different approach to history that presents events from the perspective of stateless peoples and redefines state-making as a form of internal colonialism. This new perspective requires a radical reevaluation of the civilizational narratives of the lowland states. Scott's work on Zomia represents a new way to think of area studies that will be applicable to other runaway, fugitive, and marooned communities, be they Gypsies, Cossacks, tribes fleeing slave raiders, Marsh Arabs, or San-Bushmen.


Praise For The Art of Not Being Governed: An Anarchist History of Upland Southeast Asia…

“James Scott has produced here perhaps his most masterful work to date. It is deeply learned, creative and compassionate. Few scholars possess a keener capacity to recognize the agency of peoples without history and in entirely unexpected places, practices and forms. Indeed, it leads him ever closer to the anarchist ideal that it is possible for humans not only to escape the state, but the very state form itself.”—Prasenjit Duara, National University of Singapore

“A brilliant study rich with humanity and cultural insights, this book will change the way readers think about human history—and about themselves. It is one of the most fascinating and provocative works in social history and political theory I, for one, have ever read.”—Robert W. Hefner, Boston University

"Underscores key, but often overlooked, variables that tell us a great deal about why states rise and expand as well as decline and collapse. There are no books that currently cover these themes in this depth and breadth, with such conceptual clarity, originality, and imagination. Clearly argued and engaging, this is a path-breaking and paradigm-shifting book."—Michael Adas, Rutgers University

“Finally, a true history of what pressures indigenous peoples face from these bizarre new inventions called nation states. Jim Scott has written a compassionate and complete framework that explains the ways in which states try to crowd out, envelop and regiment non-state peoples. He could take out every reference to Southeast Asia and replace it with the Arctic and it would fit the Inuit experience too. We need real applicable history that works, that fits. Truth like this, it''s too darn rare.”—Derek Rasmussen, former community activist in the Inuit territory of Nunavut, advisor to Nunavut Tunngavik Inc.
-Derek Rasmussen

“Scott’s panoramic view will no doubt enthrall many readers . . . one doesn’t have to see like a Zomian nor pretend to be an anarchist to appreciate the many insights in James Scott’s book.”--Grant Evans, Times Literary Supplement

"It is a clearly and beautifully argued book. . . . The Art of Not Being Governed fits together nicely with its predecessor as a landmark work of early 21st century social science. . . . It casts patterns of history into sharp relief that would otherwise languish in obscurity."—Henry Farrell, The American Interest
-Henry Farrell

"Scott''s books is refreshingly welcome. . . . The author argues his case in a clear, comprehensible, and erudite fashion leaving readers in little doubt as to where he stands. . . . It has made a significant contribution by highlighting egalitarianism and independence as the ideals of hill societies. . . . Scott has provided us with a platform for rethinking ethnic identities and inter-ethnic relations."—Christian Daniels, Southeast Asian Studies
-Christian Daniels

The author of several books including Seeing Like a State, James C. Scott is Sterling Professor of Political Science, professor of anthropology, and codirector of the Agrarian Studies Program, Yale University, and a fellow of the American Academy of Arts and Sciences.
Loading...
or support indie stores by buying on
(This book is on backorder)