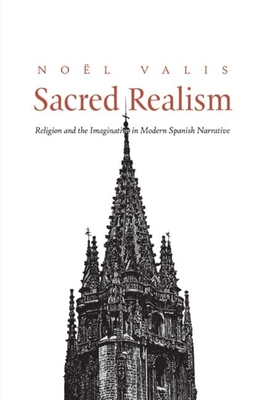 Religion and the Imagination in Modern Spanish Narrative

In this thoughtful and compelling book, leading Spanish literature scholar Noël Valis re-examines the role of Catholicism in the modern Spanish novel. While other studies of fiction and faith have focused largely on religious themes, Sacred Realism views the religious impulse as a crisis of modernity: a fundamental catalyst in the creative and moral development of Spanish narrative.


Praise For Sacred Realism: Religion and the Imagination in Modern Spanish Narrative…

“A brilliant analysis of the role religion has played in the development of the Spanish novel…. This is a gutsy book, full of insightful criticism, serious meditation on important issues, and one not afraid to argue against the tide of trendiness.”—David T. Gies, University of Virginia
— David T. Gies

“Startling, original, and convincing…. This book will become an instant classic and provoke discussion and debate at the highest intellectual level about the importance of religion in modern Spanish fiction.”—Lou Charnon-Deutsch, State University of New York at Stony Brook
— Lou Charnon-Deutsch

“[Valis] here produces her magnum opus (to date)...[She] persuasively exposes levels of imagination and belief that are common to religion and to art in general and to the realist novel in particular.”—Patrick Madigan, Heythrop Journal
— Patrick Madigan

"The book is so well documented, the analysis so convincing, that when we finish reading it, we have the false certainty that we have always known about sacred realism. But we have not, and this is Valis’s and Sacred Realism’s great success."—Elisa Marti-Lopez, Hispanic Review
— Elisa Marti-Lopez

“A remarkable book that challenges the prevailing view of religion as a spent force that has withered away in the age of modernity and the secular novel. . . . Compelling.”—Linda M. Willem, Anales Galdosianos
— Linda M. Willem

Noël Valis is Professor of Spanish and Portuguese at Yale University.
Loading...
or
Not Currently Available for Direct Purchase