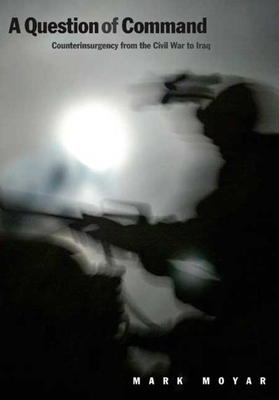 A Question of Command (Hardcover)

Moyar presents a wide-ranging history of counterinsurgency, from the Civil War and Reconstruction to Afghanistan and Iraq, that draws on the historical record and interviews with hundreds of counterinsurgency veterans, including top leaders in today’s armed forces. Through a series of case studies, Moyar identifies the ten critical attributes of counterinsurgency leadership and reveals why these attributes have been much more prevalent in some organizations than others. He explains how the U.S. military and America’s allies in Afghanistan and Iraq should revamp their personnel systems in order to elevate more individuals with those attributes.

A Question of Command will reshape the study and practice of counterinsurgency warfare. With counterinsurgency now one of the most pressing issues facing the United States, this book is a must-read for policymakers, military officers, and citizens.

Mark Moyar is director of research at Orbis Operations and the author of Triumph Forsaken: The Vietnam War, 1954–1965 and Phoenix and the Birds of Prey: Counterinsurgency and Counterterrorism in Vietnam.

Praise For A Question of Command: Counterinsurgency from the Civil War to Iraq (Yale Library of Military History)…

"Counterinsurgency warfare, as Mark Moyar demonstrates in his insightful historical study, is neither new nor unfathomable.  Throughout the past, it fails when battlefield leaders do not understand the enemy and its methods, and succeeds only when officers can convince local populations why they are better off helping foreign troops than joining their own insurgents.  Not high-tech weaponry, massive supply, or even training defeats insurgents.  Only men — smart, brave, sensitive, and inquisitive officers — now and in the past, make the difference.  Moyar offers a clear historical reminder of what defeats insurgencies at a time when most in the present age are sorely confused."—Victor Davis Hanson, Stanford University
— Victor Davis Hanson

"In the burgeoning literature on counterinsurgency prompted by American experiences in Afghanistan and Iraq, this volume stands out.  Moyar's argument, that the quality of leadership plays a far larger role in the outcome of such conflicts than is normally acknowledged, is surely correct; his graceful examination of conflicts spanning one hundred fifty years is convincing.  A book that makes an important historical argument and, just as important, will be of use to leaders who will bear responsibility on the battlefields of the Long War."—Eliot A. Cohen, author of Supreme Command: Soldiers, Statesmen, and Leadership in Wartime
— Eliot A. Cohen

"One of the great mistakes we made after the Vietnam War was forgetting what we learned there.  Mark Moyar has ensured that we don't forget what we learned in Iraq over the last seven years—and has also re-captured lessons from earlier conflicts."—Thomas E. Ricks, author of Fiasco: The American Military Adventure in Iraq and The Gamble: General David Petraeus and the American Military Adventure in Iraq, 2006-2008
— Thomas E. Ricks

"Mark Moyar convincingly demonstrates that small unit leaders win counterinsurgencies.  His chapter on Afghanistan is especially disturbing; I hope someone in authority is listening."—Bing West, author of The Strongest Tribe: War, Politics, and the Endgame in Iraq
— Bing West

“A Question of Command stands out because it reaches back quite far, and to unexpected destinations.” —Wilson Quarterly

“Moyar is a true pioneer in a field whose importance for national security has been accepted only reluctantly and belatedly by the American public. . . .  Now we have a vastly improved roadmap for guidance.”-- John Tierney, Books and Culture
— John Tierney

“Terrorism, uniquely horrifying as it is, doesn’t belong to an entirely separate and containable realm of human experience, like the one occupied by serial killers. Instead, it’s a tactic whose aims bleed into the larger, endless struggle of people to control land, set up governments, and exercise power. History is about managing that struggle.”--Nicholas Lemann, The New Yorker