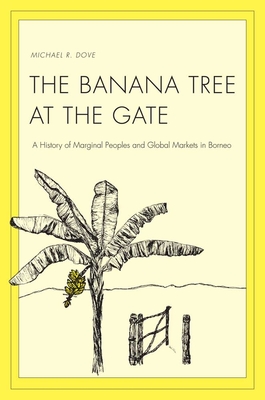 The Banana Tree at the Gate

The “Hikayat Banjar,” a native court chronicle from Borneo, characterizes the irresistibility of natural resource wealth to outsiders as “the banana tree at the gate.” Michael R. Dove employs this phrase as a root metaphor to frame the history of resource relations between the indigenous peoples of Borneo and the world system. In analyzing production and trade in forest products, pepper, and especially natural rubber, Dove shows that the involvement of Borneo’s native peoples in commodity production for global markets is ancient and highly successful and that processes of globalization began millennia ago. Dove’s analysis replaces the image of the isolated tropical forest community that needs to be helped into the global system with the reality of communities that have been so successful and competitive that they have had to fight political elites to keep from being forced out.


Praise For The Banana Tree at the Gate: A History of Marginal Peoples and Global Markets in Borneo (Yale Agrarian Studies Series)…

"This is a masterful summa of Dove’s work….It will be required reading for environmental anthropologists and area specialists, and should command the attention of geographers and those interested in colonialism, globalization, and development as well."—Aletta Biersack, University of Oregon

“Michael Dove’s historical ethnography of the Kantu Dayak in Borneo is far more than just a study of marginal peoples confronting new ways of doing things. Long awaited by his admirers, this work breaks new ground in the study of markets and households, smallholders and globalization. A meditation on the making of power and materiality, community and sustainability, knowledges and representations, The Banana Tree at the Gate will become an instant classic.” –Arun Agrawal, University of Michigan

“By placing the logic of smallscale farmers, forest-product collectors and plantation workers at the centre of his account, Dove is able to expose the mythmaking of the technical experts, and render it not just strange, but wholly unacceptable. This is engaged scholarship of stunning contemporary relevance, as global actors fixated on new riches such as oil-palm, or contracts to mitigate global warming, set out once again to lay claim to Borneo’s land and forests.”—Tania Murray Li, author of The Will to Improve: Governmentality, Development and the Practice of Politics

“This book, yet another outstanding contribution by Michael Dove, provides a fascinating account that brings the local together with the global, simultaneously setting present realities within their historical context."—Carol Colfer, Agricultural History
— Carol Colfer

"The depth of the historical excursus and the systemic interpretation of cultural, agro-ecological, and resistance practices of the Kantu in West Kalimantan take the readers well beyond the gate and the outer limits of their world into the complex transactions, both practical and symbolic, of the economies and lives of the Dayak peoples in this part of Indonesian Borneo over time."—Cristina Eghenter, Human Ecology
— Cristina Eghenter

"Though this book details the centuries of unequal terms of trade between the marginalized Kantu' Dayak peoples of Indonesian Borneo and the rest of the world, Dove does it in a way that highlights the resilience of the people as opposed to their victimhood." Kelly Heber, The Monthly Review
— Kelly Heber

Michael R. Dove is Margaret K. Musser Professor of Social Ecology and Director of the Tropical Resources Institute in the School of Forestry and Environmental Studies; Professor in the Department of Anthropology; and Curator of Anthropology in the Peabody Museum of Natural History; Yale University.
Loading...
or support indie stores by buying on