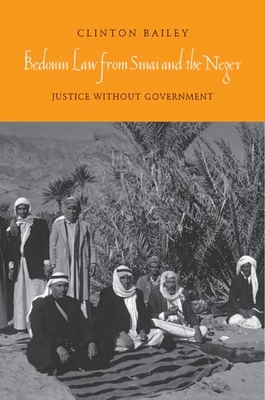 Bedouin Law from Sinai and the Negev

Bedouin Law from Sinai and the Negev is the first comprehensive study of Bedouin law published in English, including oral, pre-modern law. The material for the book, collected over the course of forty years of field work by Clinton Bailey, one of the world’s leading scholars on Bedouin culture, is of permanent scholarly value.

Bailey shows how a nomadic desert-dwelling society provides for its own law and order in the traditional absence of any centralized authority or law enforcement agency to protect it. This comprehensive picture of Bedouin law, offers readers a unique opportunity to understand Bedouin law by highlighting the close connection between the law and the culture from which it emerged.


Praise For Bedouin Law from Sinai and the Negev: Justice without Government…

“Clinton Bailey is an extraordinary master of Bedouin culture, bringing to us the beauty of Bedouin poetry and way of life. Now he has turned to a subject of equal fascination: Bedouin law, fashioned from the traditions of nomadic life and a keen sense of justice.  Bailey’s book has deep meaning for anyone interested in distant cultures and in how the concept of law develops in a society.”—Anthony Lewis, author of Freedom for the Thought That We Hate: A Biography of the First Amendment

“Bailey confronts a central issue in Bedouin life: the ability to survive without a government and maintain legal traditions that contribute to social stability. There is no other comprehensive study in English that analyzes this phenomenon as thoroughly as Bailey’s.”—Ernest S. Frerichs, Brown University

"Bailey's book is not only original, but extremely important, as it broadens the range of literature available on the Bedouin."—Benjamin Saidel, East Carolina University

Clinton Bailey is a Research Fellow on Bedouin culture at Trinity College, Hartford. He has been an advocate and activist on behalf of Bedouin civil rights in Israel since 1978 and has served as consultant on Bedouin culture to the BBC, the British Museum, and the Museum of Bedouin Culture in Kibbutz Lahav, Israel. He is the author of A Culture of Desert Survival: Bedouin Proverbs from Sinai and the Negev, published by Yale University Press; and Bedouin Poetry from Sinai and the Negev: Mirror of a Culture, published by Oxford University Press.