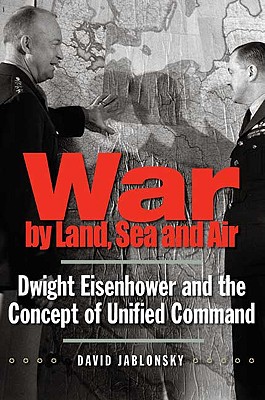 War by Land, Sea, and Air

Dwight Eisenhower and the Concept of Unified Command

In this book aretired U.S. Army colonel and military historian takes a fresh look at Dwight D. Eisenhower's lasting military legacy, in light of his evolving approach to the concept of unified command. Examining Eisenhower's career from his West Point years to the passage of the 1958 Defense Reorganization Act, David Jablonsky explores Eisenhower's efforts to implement a unified command in the U.S. military a concept that eventually led to the current organization of the Joint Chiefs of Staff and that, almost three decades after Eisenhower's presidency, played a major role in defense reorganization under the Goldwater-Nichols Act. In the new century, Eisenhower's approach continues to animate reform discussion at the highest level of government in terms of the interagency process.


Praise For War by Land, Sea, and Air: Dwight Eisenhower and the Concept of Unified Command…

"David Jablonsky has written a book that should be considered the primary source for any student of joint and combined military organization at the national and international levels.  The professional development of General Eisenhower is a study in itself and will enrich any professional soldier."—Lieutenant General Richard G. Trefry, US Army (ret.)
-LTG Richard G. Trefry

"A powerful and necessary addition to the Eisenhower literature, demonstrating his strategic leadership as well as his crucial role as president in leading the services into the postwar world."—Major General William F. Burns, US Army (ret.), Distinguished Fellow, US Army War College
-Maj Gen William F. Burns

"David Jablonsky is one of the nation''s most prolific writers on military strategy. Each of his books gets more interesting and insightful. His latest, War by Land, Sea, and Air, is without question his best. Jablonsky manages to meld a synthesis of Eisenhower''s growth from a staff officer to the father of the American system of joint and coalition command. His depiction of Eisenhower''s personal travails and his eventual triumphs is without question the finest treatment of high-level command in American literature."—Major General Robert H. Scales, US Army (ret.), Former Commandant of the Army War College
-Maj Gen Robert H. Scales

“Well-written and well-researched. . . . A relatively short history that not only serves as an effective military biography but also as a primer on efforts at military unification in the aftermath of the war. . . . Rewarding.”—Lieutenant Joel I. Holwitt, U.S. Navy, Proceedings
-Joel I. Holwitt

David Jablonsky is a retired U.S. Army infantry colonel and is a graduate of the U.S. Army Command and Staff College and the U.S. Army War College. His awards and decorations include the Silver Star and Purple Heart. He is a Distinguished Fellow of the U.S. Army War College at Carlisle, PA, where as professor of national security affairs he held the Elihu Root Chair of Strategy; the George C. Marshall Chair of Military Studies; and the Dwight D. Eisenhower Chair of National Security Studies. He lives in Carlisle, PA.
Loading...
or
Not Currently Available for Direct Purchase