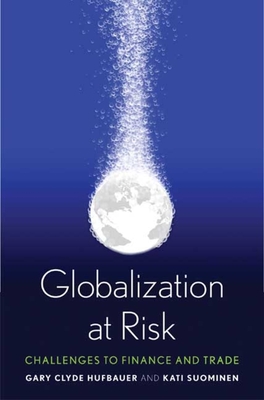 Challenges to Finance and Trade

Drawing on rigorous research, this book summarizes the payoffs from globalization past, and presents a roadmap for the future of globalization.

History has declared globalization the winner of the 20th century. Globalization connected the world and created wealth unimaginable in the wake of the Second World War. But the financial crisis of 2008-09 has now placed at risk the liberal economic policies behind globalization. Engulfing the entire world, the crisis gave new fuel to the skeptics of the benefits of economic integration. Policy responses seem to favor anti-globalizers. New regulations could balkanize the global financial system, while widespread protectionist impulses might undo the Doha Round. Issues from climate change to national security may be used as convenient excuses to keep imports out, keep jobs at home, and to clamp down on global capital. Will globalization triumph or perish in the 21st century? What reforms make sense in the post-crisis world?

International economists Gary Clyde Hufbauer and Kati Suominen argue that globalization has been a force of great good, one that needs to be actively advanced and honed. Drawing on the latest economic analyses, they reveal the drivers and effects of global finance and trade, lay out the key risks to globalization, and offer a practical policy roadmap for managing the challenges while increasing the gains. Vital reading for anyone in business, finance, foreign affairs, or economics, Globalization at Risk is sure to advance public debate on this defining issue of the 21st century.


Praise For Globalization at Risk: Challenges to Finance and Trade…

"This book is a gem—an extraordinarily fair and persuasive assessment of how the great financial crisis came about and what it means for the future of globalization."—David M. Smick, author of The World is Cruel: Hidden Dangers to the Global Economy
— David M. Smick

“This is an enormously impressive piece of work! This volume provides an extremely lucid and accessible analysis of the current international financial crisis, and proposals for regulation and reform. Let me repeat the terms 'lucid' and 'accessible' – it is notoriously hard to explain economics in a way that is understandable to broad public audiences.”—Theodore H. Moran, Marcus Wallenberg Professor of International Business and Finance, Georgetown University
— Theodore H. Moran

"A thoughtful, timely and invaluable book about globalization would explain what the crisis of 2007-2009 did to the world economy and what breakthrough ideas and practical policies are now required to put us on a long term path of steady growth and job creation. It would incorporate cutting edge research and be written in language that any reader of The Economist could easily understand. It could serve as a roadmap for policy makers around the world and provide essential background to citizens whose support those decision-makers will need. Gary Hufbauer and Kati Suominen have written that book.”—Jeffrey E. Garten, Juan Trippe Professor of International Trade and Finance, Yale School of Management, Former Undersecretary of Commerce for International Trade, Clinton administration

"This is a must-read for anyone interested in finance, trade, multinationals and workers in our globalizing world.  It combines an extremely rich information on a troubled decade with a quiet examination of dueling analyses, and presents a wide set of possible solutions.  Policy analysis at its best with the zest of humor that open-minded knowledge permits and difficult times require."—Patrick Messerlin, Groupe d’Economie Mondiale at Sciences Po
— Patrick Messerlin

Gary Clyde Hufbauer, Reginald Jones Senior Fellow at the Institute for International Economics, was formerly the Marcus Wallenberg Professor of International Finance Diplomacy and deputy director of the International Law Institute at Georgetown University. Kati Suominen is Transatlantic Fellow at the German Marshall Fund of the United States. In 2004–10, she served as Trade Economist at the Inter-American Development Bank, where she managed the Bank’s global trade policy research. Both authors live in Washington, D.C.
Loading...
or support indie stores by buying on