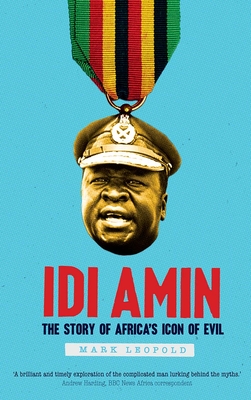 The Story of Africa's Icon of Evil

“Sharply written, forensically researched. . . . A meticulous re-examination of Amin’s life, producing a narrative packed with original evidence, and one that strives at all times to be scrupulously well balanced. ”—Paul Kenyon, The Sunday Times, London

Idi Amin began his career in the British army in colonial Uganda, and worked his way up the ranks before seizing power in a British-backed coup in 1971. He built a violent and unstable dictatorship, ruthlessly eliminating perceived enemies and expelling Uganda’s Asian population as the country plunged into social and economic chaos.

In this powerful and provocative new account, Mark Leopold places Amin’s military background and close relationship with the British state at the heart of the story. He traces the interwoven development of Amin’s career and his popular image as an almost supernaturally evil monster, demonstrating the impossibility of fully distinguishing the truth from the many myths surrounding the dictator. Using an innovative biographical approach, Leopold reveals how Amin was, from birth, deeply rooted in the history of British colonial rule, how his rise was a legacy of imperialism, and how his monstrous image was created.

Praise For Idi Amin: The Story of Africa's Icon of Evil…

“[T]his sharply written, forensically researched book...succeeds as a meticulous re-examination of Amin’s life, producing a narrative packed with original evidence, and one that strives at all times to be scrupulously well balanced. ”—Paul Kenyon, The Sunday Times

“Sizing up the challenge of separating fact from fiction, Leopold adopts a novel approach, abandoning straightforward biography in favour of a meticulous examination of the reliability of the various accounts written as Amin rose to prominence...Leopold picks off the myths, one by one.”—Michela Wrong, The Times


“Leopold gives a far more nuanced version of Amin than the common picture of him as a psychotic monster...He quotes extensively from a wide range of conflicting accounts of Amin’s character, origins and career, testing their reliability [and] has also made extensive use of Britain’s National Archives, trawling through the dispatches of diplomats and officials who had dealings with Amin.”—Martin Meredith, The Daily Telegraph

‘At last, we have a nuanced and sophisticated examination of one of the most misunderstood, and caricatured, figures in modern African history. At once gripping, empathic, and deeply researched, this book is a hugely important contribution.’—Richard Reid, Professor of African History, University of Oxford

‘Instead of the caricature of a merely evil buffoon, the Idi Amin who emerges from this fascinating book is all too chillingly human.’—Andrew Harding, BBC News Africa Correspondent

‘A wonderfully written, original account of the enigmatic Idi Amin.'—Simukai Chigudu, author of The Political Life of an Epidemic

‘Amin was a much more complex person than most think. And his relationships with Britain were also more complex than it is often safe to admit. Leopold's book restores complexity and detail to the man in a way that instructs us never to look superficially at tragedy.’—Stephen Chan, author of Grasping Africa

Mark Leopold is lecturer in social anthropology at the University of Sussex.  His research in Idi Amin’s home area led to the book Inside West Nile, chosen as an "outstanding academic title of 2005" by the American Library Association.
Loading...
or support indie stores by buying on
(This book is on backorder)