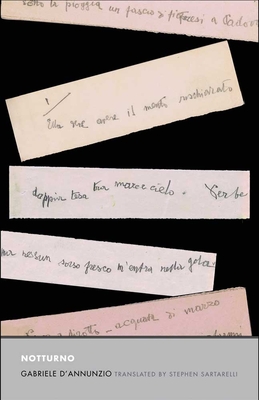 Composed during a period of extended bed rest, Gabriele D'Annunzio's Notturno is a moving prose poem in which imagination, experience, and remembrance intertwine. The somber atmosphere of the poem reflects the circumstances of its creation. With his vision threatened and his eyes completely bandaged, D'Annunzio suffered months of near-total blindness and pain-wracked infirmity in 1921, and yet he managed to write on small strips of paper, each wide enough for a single line. When the poet eventually regained his sight, he put together these strips to create the lyrical and innovative Notturno.

In Notturno D'Annunzio forges an original prose that merges aspects of formal poetry and autobiographical narrative. He fuses the darkness and penumbra of the present with the immediate past, haunted by war memories, death, and mourning, and also with the more distant past, revolving mainly around his mother and childhood. In this remarkable translation of the work, Stephen Sartarelli preserves the antiquated style of D'Annunzio's poetic prose and the tension of his rich and difficult harmonies, bringing to contemporary readers the full texture and complexity of a creation forged out of darkness.


Praise For Notturno (The Margellos World Republic of Letters)…

"[A] remarkably interesting work . . . Sartarelli's superbly readable translation, presented here along with his illuminating explanatory notes and a helpful preface by Virginia Jewiss that sets text and author alike in historical and cultural context, provides everything that readers unable to engage with Notturno in the original Italian could possibly need."—S. Botterill, Choice
— S. Botterill

“A supple English translation . . . [Notturno] was D’Annunzio’s entry into the steam-of-consciousness sweepstakes, his most openly modernist work, admired by many, including Hemingway . . . Notturno is D’Annunzio’s last major contribution to literature.”—Jonathan Galassi, New Republic

Gabriele D'Annunzio (1863–1938), a major figure in modern Italian literature, published his first volume of poetry in 1879 and went on to write numerous novels, short stories, plays, autobiographical works, and further volumes of poetry. Stephen Sartarelli, an award-winning translator and poet, has published more than twenty books of translation from Italian and French and three volumes of poetry. He lives in France.
Loading...
or
Not Currently Available for Direct Purchase