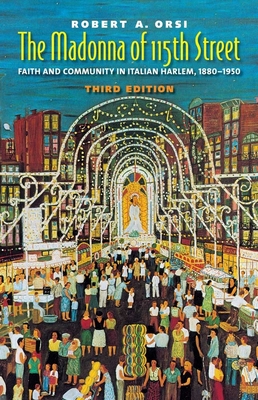 The Madonna of 115th Street

In a masterful evocation of Italian Harlem and the men and women who lived there, Robert Orsi examines how the annual festa of the Madonna of 115th Street both influenced and reflected the lives of the celebrants. His prize-winning book offers a new perspective on lived religion, the place of religion in the everyday lives of men, women, and children, the experiences of immigration and community formation, and American Catholicism. This edition includes a new introduction by the author that outlines both the changes that Italian Harlem has undergone in recent years and significant shifts in the field of religious history.

Reviews of the earlier edition:

“A richly tapestried portrait-narrative. . . . Orsi is to be commended for a truly significant contribution to the annals of American social history.” —Francesco Cordasco, USA Today

"[Orsi] convey[s], at times movingly, the sense of loss that is part of the immigrant experience and the tensions that it produces in the immigrant family."—Vincent Crapanzano, Times Literary Supplement

"An imaginative and subtly written account of the development of Italian community life in New York. . . . It is an excellent analysis of a complex religious and domestic experience."—Sunday Times

"An in-depth historical study of the Italian-American community and its religion, without sentimentalizing values and perceptions."—Kirkus Reviews

"The Madonna Of 115th Street is a richly tapestried portrait-narrative of the popular religious celebration annually commemorated in the 'festa' of the Madonna of Mount Carmel on 115th Street in East Harlem. . . . Orsi is to be commended for a truly significant contribution to the annals of American social history."—Francesco Cordasco, USA Today

"A treasure. . . . Robert Orsi makes a significant contribution, not only to Italian immigrant history, but also to the understanding of a complex religious experience, a theology of the streets."—Louis R. Gigante, America

"Carefully organized and clearly written, the study is based upon extensive research, particularly upon interviews conducted in the 1930s and more recently, with residents of the community. Orsi's work will have to be examined by all students of immigration, urbanization, and American Catholicism."—Choice

"Orsi has fashioned an impressive fusion of the inner histories of immigrant social and religious life. . . . This book should serve as a model for the study of popular religion."—John W. Briggs, American Historical Review

"This analysis is not only marked by originality and imagination that in themselves would render distinction to the study, but perhaps even more importantly by a sensitivity to and an appreciation of the system of cultural meanings among the people of Italian Harlem."—Richard N. Juliani, International Migration Review

"With the skill of a novelist, Orsi presents to the reader the smells, textures, and colors of the celebration.  He fully appreciates the importance of the sensual world to the religious imagination. The festa unites the whole community in a religious undertaking. . . . The Madonna Of 115th Street remedies a serious blind spot in contemporary studies of immigrant life in America. While urban and social historians have provided us with excellent studies of work and family patterns, they have neglected to take seriously the role of religious sentiments in shaping the world view of America's immigrants."—P. Joseph Cahill, Journal of the American Academy of Religion

"This is a beautiful book."—Peter W. Williams, Church History

"I found it refreshing to come across an author who truly respects and empathizes with those immigrants and studies them on their own terms."—John E. Zucchi, Canadian Review of American Studies

"Orsi invites us into the streets, the homes, and the hearts of the Italians of East Harlem in this richly textured study of the immigrants and their progeny. . . . Orsi raise[s] pertinent and engaging questions regarding the melding of ethnicity, religion, and community values which have implications beyond the scope of the present work."—Arlin C. Migliazzo, Fedes et Historia

"Orsi provides a sensitive portrayal of the agonies and hardships as well as the joys and hopes of the people of Italian Harlem. . . . A story of suffering, conflict, and hope that is intimately related to Mary and through Mary to Christ. Orsi makes the popular, cult come alive and reveals the meaning it had for those who participate in it."—Patrick W. Carey, Records of the American Catholic Historical Society

"A masterful evocation of Italian Harlem and the men and women who lived there, Orsi's examination of how the annual festa of the Madonna of 115th Street both influenced and reflected the lives of the celebrants provides "a major contribution to immigrant history and to the growing literature on popular piety."—Albert J.  Raboteau, Commonweal

"Orsi offers a seminal and groundbreaking study of faith and community in New York City’s Italian Harlem. . . . A compelling perspective on how religion plays out in the everyday lives and experiences of American Catholics and the formation of a distinctive immigrant community. This Yale Nota Bene paperback edition is highly recommended reading and enhanced with a new introduction by Orsi outlining the changes that Italian Harlem has undergone in recent years and the significant shifts that have occurred in the field of American religious history."—The Midwest Book Review

"A superb piece of work. Orsi makes a major contribution toward our understanding of popular religion, the experiences of immigration and community formation, and American Catholicism."—David O'Brien, College of the Holy Cross

"By showing the intimate relationship between home and devotion to Our Lady of Mount Carmel, Orsi demonstrates the unique role Italian American women played in creating a sense of community in the Harlem of the 30's and 40's. The different ways men and women adapted old tradition, including popular religion, to meet new needs proves beyond question that gender is an essential category of historical analysis."—Temma Kaplan, Historian, Director of the Barnard Center for Research on Women, Barnard College, Columbia University

"This story is as quintessentially American as it is Italian—of a basement madonna whose adoration long symbolized the hopes, realities, and sorrows of a vibrant immigrant people. It is stunning achievement, not only for its author, but for a powerful new union of social history and religious studies."—Jon Butler, University of Illinois at Chicago

"The demand is for studies of popular religion. Long popular in France, it has arrived in America. Orsi has done the best job of it I have read thus far. He understands the need for, but also the limitations of institutional history. This tale of the village church of Italian Harlem, focusing on 'la mamma della casa,' the image of the Madonna del Carmine, is a breakthrough, a significant contribution not only to understanding the innermost levels of Italian American religion, but to the American urbanization of rural Italian villagers. It is vivid and it is intimate in its picture of the Italian concept of 'family,' in its sympathetic yet scholarly understanding of the relationship of a people's religion to institutional forms. This is 'people history' at its best."—James Hennesey, S.J., Professor of the History of Christianity, Boston College

"In his new introduction to The Madonna of 115th Street, Robert Orsi brilliantly chronicles the twisting course of American religious studies since the book was first published in 1986. Here he defends a distinctive ethnographic approach to religious history, while exposing generic uses of 'history' and 'religion' as much abused sources of power and arrogance. He relates the inward searching prompted by his archival and relational research and examines the changing features of the festa since the book was first published. It is a dazzling addition to one of the most influential analyses of religion in our time."—R. Marie Griffith

Robert A. Orsi, Warren Professor of American Religious History at Harvard University, is the author of Thank You, St. Jude, also available in paperback from Yale University Press.
Loading...
or
Not Currently Available for Direct Purchase