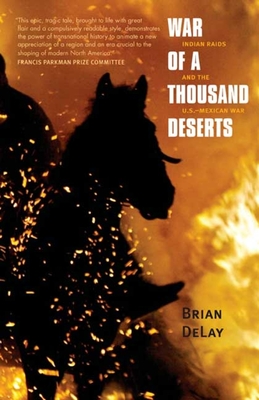 War of a Thousand Deserts (Paperback)

Indian Raids and the U.S.-Mexican War (The Lamar Series in Western History)

In the early 1830s, after decades of relative peace, northern Mexicans and the Indians whom they called “the barbarians” descended into a terrifying cycle of violence. For the next fifteen years, owing in part to changes unleashed by American expansion, Indian warriors launched devastating attacks across ten Mexican states. Raids and counter-raids claimed thousands of lives, ruined much of northern Mexico’s economy, depopulated its countryside, and left man-made “deserts” in place of thriving settlements. Just as important, this vast interethnic war informed and emboldened U.S. arguments in favor of seizing Mexican territory while leaving northern Mexicans too divided, exhausted, and distracted to resist the American invasion and subsequent occupation.

Exploring Mexican, American, and Indian sources ranging from diplomatic correspondence and congressional debates to captivity narratives and plains Indians’ pictorial calendars, War of a Thousand Deserts recovers the surprising and previously unrecognized ways in which economic, cultural, and political developments within native communities affected nineteenth-century nation-states. In the process this ambitious book offers a rich and often harrowing new narrative of the era when the United States seized half of Mexico’s national territory.


Praise For War of a Thousand Deserts: Indian Raids and the U.S.-Mexican War (The Lamar Series in Western History)…

"Action-packed and densely argued."—Larry McMurtry, New York Review of Books
"In War of a Thousand Deserts, Brian DeLay tells the fascinating—and long-forgotten—story of the savage, interethnic conflict between independent tribes, Mexicans, Texans and norteamericanos. . . . [DeLay] is an imaginative and resourceful researcher. . . . Drawing on contemporary accounts by Mexicans and Texans, DeLay provides a sophisticated, speculative, and controversial account of the motivations of Indians."—Glenn Altschuler, Tulsa World
"[A] masterful exercise in the reading of a broad range of primary sources to which historians have previously paid scant attention. DeLay tells a fascinating story that will reshape how historians understand and explain the coming of the U.S.-Mexican War and its aftermath."—Jesús F. de la Teja, Great Plains Quarterly
"Brian DeLay offers an important reassessment of not only the U.S.-Mexican war but also the history of American expansion more broadly. . . . DeLay's War of a Thousand Deserts beautifully narrates the under-told tale of how Native Americans powerfully determined the history of U.S. expansion into Mexico."—Ned Blackhawk, The Journal of Military History
"Over all, [War of a Thousand Deserts] provides a most satisfying, interesting narrative without sacrificing critical assessment or theoretical considerations."—F. Arturo Rosales, Montana the Magazine of Western History
"Meticulously researched, the book shows that the impact of Native American activities in the region was stronger and had more lasting consequences than did the activities of Spaniards, Mexicans, or Americans."—J. A. Stuntz, Choice
"In this provocative and ambitious book, DeLay situates southern plains peoples at the very center of the geopolitical transformation of North America in the mid-nineteenth century. . . . Offering dates, locations, and demographic data on participants and victims that he culled from Mexican sources, [War of a Thousand Deserts] is a variable treasure trove for future scholars."—Amanda Taylor-Montoya, Common-Place
"This remarkable work fills an important gap in American historiography. . . . This brilliant work will certainly please the scholarly reader. . . . DeLay's superb scholarship has culminated in a nuanced yet lucid narrative that will doubtless become a required reference for U.S., Mexico, Native American, and Borderlands scholars for a long time."—Joaquin Rivaya-Martinez, Southwestern History Quarterly
"The author . . . has discovered a significant but overlooked phenomenon in front of and behind the U.S. Mexican War. . . . This is a superb contribution to the history of America's expansionist era."—DLW, Roundup Magazine
"This innovative political history presents a compelling interpretative framework for the U.S.-Mexican War of 1846-1848."—Cynthia Radding, American Historical Review
"An engaging book that enlivens the debate over the clash between Indians, Mexicans, and Americans in the Southwest. Both Indian and western historians, as well as those who still call themselves borderlands specialists, will want to read DeLay's work."—Gary Clayton Anderson, Western Historical Quarterly
"This prize-winning study explores the part indigenous societies played in directing their own fate, and in doing so provides important insight on the agency these peoples possessed."—Joseph F. Stoltz III, Journal of the Early Republic
"[An] outstanding book. . . . A highly readable, jargon-free, interpretive study. . . . The work is a rare combination of wit, intelligence, and a dash of cynicism that produces a sparkling narrative full of juicy anecdotes and profound conclusions. The War of a Thousand Deserts provides many jewels of wisdom for those fortunate enough to read it. . . . The War of a Thousand Deserts is a brilliant study and a magnificent contribution to the historiography of the U.S.-Mexico War and the Southwest."—Douglas W. Richmond, New Mexico Historical Review
Received an honorable mention from the Texas State Historical Association
Received Honorable Mention for the 2008 PROSE Award in the U.S. History and Biography/Autobiography category, sponsored by the Association of American Publishers
Winner of the 2008 Summerfield G. Roberts Award, presented by the Sons of the Republic of Texas
Finalist for the 2008 Francis Parkman Prize sponsored by the Society of American History
Winner of the 2009 Robert M. Utley Award given by the Western History Association

"Brian DeLay is one of the most articulate and original authors writing in the Western Americana field today."—Howard R. Lamar, author of The New Encyclopedia of the American West

"With a good sense of drama and narrative, DeLay tells the story of how the interactions and preconceptions of Mexicans, Americans, and independent Indian tribes shaped the borderland region in ways none of the parties expected. This book will force many readers to rethink their basic assumptions about Indians as nineteenth-century political actors. This is not just the most significant work on the U.S.-Mexico War to appear in a generation, but a study with wide-ranging implications for the history of North America. Brian DeLay shows how enlightening transnational history can be when done well."—Amy S. Greenberg, The Pennsylvania State University

"In supple prose, DeLay analyzes the interactions in the years leading up to the war among three ‘nations’—the struggling new Mexican republic, the confident and opportunistic (but also relatively new) U.S., and the older, highly dynamic peoples of indigenous America—as well as among the compellingly depicted individuals and groups that composed them."—Margaret Chowning, University of California at Berkeley

"DeLay's War of a Thousand Deserts begins with a long-neglected question: what role did Indian Nations of the Southern Plains—Comanches, Kiowas, Apaches—play in the era of the U.S.-Mexican War?  His answers sweep across the borderlands in stories of violence, trauma, and the devastating cultural effects of endemic warfare on indigenous and Mexican peoples alike. A tireless researcher and gifted writer has given us a necessary, if profoundly disturbing, look at the history of our American West."—James F. Brooks, author of Captives & Cousins: Slavery, Kinship, and Community in the Southwest Borderlands

"Brian DeLay’s compelling and well-documented narrative of a little-known subject—Indian raids into northern Mexico—offers new insights on the impact of those attacks on the affected countries and peoples."—Pedro Santoni, author of Mexicans at Arms: Puro Federalists and the Politics of War, 1845-1848