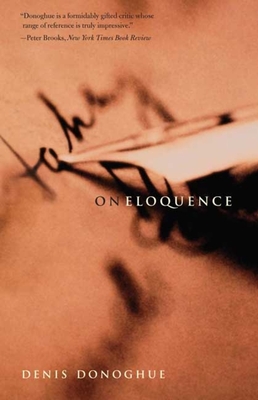 On Eloquence questions the common assumption that eloquence is merely a subset of rhetoric, a means toward a rhetorical end. Denis Donoghue, an eminent and prolific critic of the English language, holds that this assumption is erroneous. While rhetoric is the use of language to persuade people to do one thing rather than another, Donoghue maintains that eloquence is “gratuitous, ideally autonomous, in speech and writing an upsurge of creative vitality for its own sake.” He offers many instances of eloquence in words, and suggests the forms our appreciation of them should take. Donoghue argues persuasively that eloquence matters, that we should indeed care about it. “Because we should care about any instances of freedom, independence, creative force, sprezzatura,” he says, “especially when we live—perhaps this is increasingly the case—in a culture of the same, featuring official attitudes, stereotypes of the officially enforced values, sedated language, a politics of pacification.” A noteworthy addition to Donoghue’s long-term project to reclaim a disinterested appreciation of literature as literature, this volume is a wise and pleasurable meditation on eloquence, its unique ability to move or give pleasure, and its intrinsic value.

Denis Donoghue is University Professor and Henry James Professor of English and American Letters, New York University. Among his many books are The Practice of Reading; Words Alone: The Poet T. S. Eliot; Speaking of Beauty (a New York Times Notable Book of the Year); and The American Classics: A Personal Essay, all published by Yale University Press.