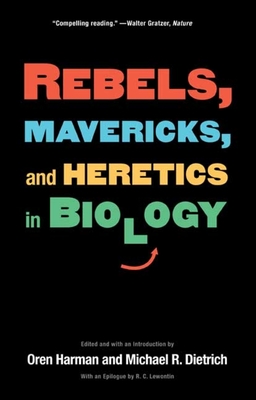 Rebels, Mavericks, and Heretics in Biology

The stories of nineteen scientists--some famous, some forgotten--who stubbornly challenged assumptions and icons in the life sciences

This book is the first devoted to modern biology’s innovators and iconoclasts: men and women who challenged prevailing notions in their fields. Some of these scientists were Nobel Prize winners, some were considered cranks or gadflies, some were in fact wrong. The stories of these stubborn dissenters are individually fascinating. Taken together, they provide unparalleled insights into the role of dissent and controversy in science and especially the growth of biological thought over the past century.

Each of the book’s nineteen specially commissioned chapters offers a detailed portrait of the intellectual rebellion of a particular scientist working in a major area of biology--genetics, evolution, embryology, ecology, biochemistry, neurobiology, and virology as well as others. An introduction by the volume’s editors and an epilogue by R. C. Lewontin draw connections among the case studies and illuminate the nonconforming scientist’s crucial function of disturbing the comfort of those in the majority. By focusing on the dynamics and impact of dissent rather than on “winners” who are credited with scientific advances, the book presents a refreshingly original perspective on the history of the life sciences.

Scientists featured in this volume: