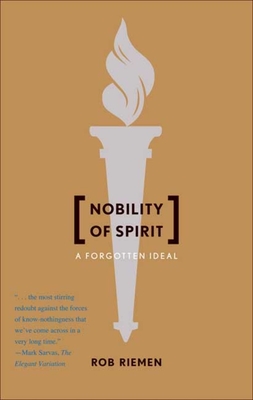 An impassioned call to restore the conditions of freedom and human dignity, ideals our civilization seems to have lost

In the pages of this slim, powerful book Rob Riemen argues with passion that “nobility of spirit” is the quintessence of a civilized world. It is, as Thomas Mann believed, the sole corrective for human history. Without nobility of spirit, culture vanishes. Yet in the early twenty-first century, a time when human dignity and freedom are imperiled, the concept of nobility of spirit is scarcely considered.

Riemen insists that if we hope to move beyond the war on terror and create a life-affirming culture, we must address timeless but neglected questions: What is a good society? Why art? Why culture? What is the responsibility of intellectuals? Why anti-Americanism? Why nihilism? Why the cult of death of fundamentalists? In a series of three essays, the author identifies nobility of spirit in the life and work of Baruch Spinoza and of Thomas Mann; explores the quest for the good society in our own time; and addresses the pursuit of truth and freedom that engaged figures as disparate as Socrates and Leone Ginzburg, a Jewish Italian intellectual murdered by Nazis.

“The forces now aligned against humanistic values are manifold,” observes George Steiner in the foreword to the book. In this imaginative and compelling volume, Riemen addresses these forces and speaks to every reader who believes in the power of classical ideas to restore Western civilization’s highest values.


Praise For Nobility of Spirit: A Forgotten Ideal…

“Rob Riemen has written a rare and much needed book, one which we appreciate not because we necessarily agree with its views, but for its commitment to ideas and its passion for imagination. It is a timely reminder of how imaginative knowledge can become a way of questioning, connecting to and changing the world as well as ourselves.”—Azar Nafisi

“The author’s vast cultural knowledge, his firm commitment to liberal ideals and the agility of his pen make these essays an invaluable guide to orient us amid the great political and cultural problems—and the ideological confusions—of the world in which we live.”—Mario Vargas Llosa

“Rob Riemen's essays spring from a deep and firm conviction—they are like water from artesian wells and this is, I think, the main reason why they are so important and refreshing.”—Adam Zagajewski

“Written with such elegance, erudition and skill, a singular reflection of fundamental problems, virtues and vices, of our time.”—Ivan Klima

"With beautiful clarity, Rob Riemen renders complex ideas simple and accessible to every earnest reader. His work is the embodiment of civilization: what it has sometimes briefly been, and what it can be again."—Cynthia Ozick

Rob Riemen, an essayist and cultural philosopher, is founder of the Nexus Institute, an international center devoted to intellectual reflection and to inspiring Western cultural and philosophical debate. He lives in the Netherlands.