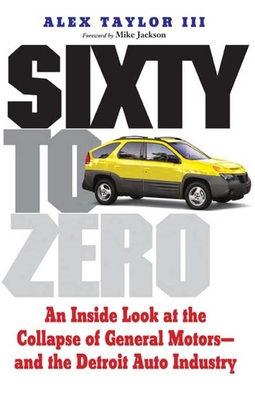 An award-winning journalist's insights into the auto industry, the decline of once-great companies, and the failures of management

The collapse of General Motors captured headlines in early 2009, but as Alex Taylor III writes in this in-depth dissection of the automaker’s undoing, GM’s was a meltdown forty years in the making. Drawing on more than thirty years of experience and insight as an automotive industry reporter, as well as personal relationships with many of the leading players, Taylor reveals the many missteps of GM and its competitors: a refusal to follow market cues and consumer trends; a lack of follow-through on major initiatives; and a history of hesitance, inaction, and failure to learn from mistakes. In the process, he provides lasting lessons for every executive who confronts the challenges of a changing marketplace and global competition. Yet Taylor resists condemning GM’s leadership from the privileged view of hindsight. Instead, his account enables the reader to see GM’s decline through the eyes of an insider, with the understanding that corporate decision-making at a company as large as General Motors isn’t as simple as it may seem. Taylor’s book serves as a marvelous case study of one of the United States’ premier companies, of which every American quite literally now holds a share.


Praise For Sixty to Zero: An Inside Look at the Collapse of General Motors--and the Detroit Auto Industry…

“A cogent kick-the-tires account of a disaster that was 40 years in the making. A gifted writer, Taylor is also refreshingly candid about himself as well as GM. . . . His book is informative—and fun to read.”—Glenn C. Altschuler, NPR's Books We Like
— Glenn C. Altschuler

“Sixty to Zero is a melodrama for the ages and one that continues to unfold today. A must-read for everyone in the auto industry and for anyone else interested in what happens at the intersection of corporate culture and human frailty.”—John Krafcik, president and CEO, Hyundai Motor America and major contributor to The Machine That Changed the World
— John Krafcik

“Sixty to Zero is a penetrating and compelling account of how the icon of 20th century American business went bust within a decade of the new century.  We witness close-up how General Motors’ leaders stalled decisions, resisted ideas, flubbed execution, and otherwise repeated startling acts of 'driver error.' For learning from one of the greatest unforced corporate failures of modern times, this is a vivid and definitive account.”—Michael Useem, Professor of Management at the Wharton School, University of Pennsylvania, and author of The Leadership Moment and co-author of The India Way
— Michael Useem

“Taylor understands that the domestic car makers’ troubles didn't begin a few years ago. To identify the seeds of their destruction, you have to go back decades and that's exactly what he has done. This is a smart, lively, and personal account of Detroit’s crack-up.”—Csaba Csere, Former editor-in-chief of Car and Driver

"A terrific job — well written and very informative. I don't know of another journalist besides Alex Taylor who could have done as well."—David E. Cole, Chairman, Center for Automotive Research

“Insights into the journalistic mindset, as well as keen observations about GM itself, are what make Sixty to Zero an enlightening and engaging read.”--Paul Ingrassia, Wall Street Journal

"Having covered the auto industry for Fortune magazine for years, Taylor knows his subject well. . . . Taylor's book is a concise, up-to-date telling of what happened [to GM] and why."—Larry Printz, Virginian-Pilot
— Larry Printz

"Sixty to Zero offers a thorough look, warts and all, at what has happened to the American auto industry during the past 20 years."—Henry Holtzman, Inland Empire Business Journal
— Henry Holtzman

Alex Taylor III is a senior editor at Fortune magazine. He is a member of the International Motor Press Association and is on the jury for the North America Car of the Year Awards. Mike Jackson is the chairman and chief executive officer of AutoNation. Previously, he served as president and chief executive officer of Mercedes-Benz USA, LLC.
Loading...
or
Not Currently Available for Direct Purchase