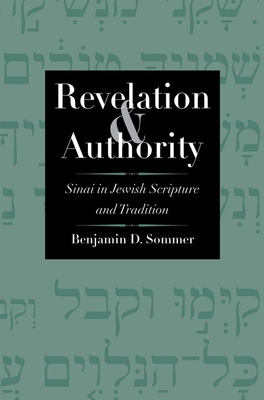 “[A] groundbreaking work . . . Clearly written and broad in application . . . an important read for Jewish laypeople, clergy, and scholars . . . [and] also likely to appeal to non-Jews who want to make modern biblical scholarship relevant for believers.”—Publishers Weekly (starred review)

“Sommer lays out his argument in six well-informed and cogent chapters.”—Marvin A. Sweeney, AJS Review


“An essential volume for all those engaged in the study of the Hebrew Bible, biblical interpretation, Jewish thought, and biblical theology . . . courageous, honest, and dynamic.”—Hindy Najman, Marginalia Review of Books

“Jews and non-Jews who read [Revelation and Authority] will discover a wealth of information and an intriguing discussion of the place of the Bible within the corpus of Jewish literature.”—Gary G. Porton, Review of Rabbinic Judaism

"In his thoughtful, creative, and learned book, Revelation and Authority, Benjamin Sommers reflects on Catholic ideas of the relationship between scripture and tradition."—John C. Cavadini, Marginalia

"As Sommer so masterfully explicates, Talmud Torah creates a sacred space, a dialogical topos in which devout Jews study, debate, and question the biblical record of the Israelites' encounter with God."—Paul Mendes-Flor, Marginalia

“This is a masterful work, integrating strands and patterns in biblical, rabbinic, medieval, and modern Jewish thought into a constructive scholarly project.”—Yudit Kornberg Greenberg, Reading Religion

“A refreshing, intellectually, and morally honest approach towards the role the Hebrew Bible might play for a religious Jew, or indeed for any religious person who grapples with how to treat the Bible both as scripture and as flawed.”—Sarah Wolf, Journal of Law and Religion

“The breadth, creativity, and boldness of Sommer’s book along with the clarity of his writing impressed the judges.”—Prize Committee, 2015 Jordan Schnitzer Book Award


"In uncovering the multilayered concepts of revelation in the biblical traditions Benjamin Sommer provides us the biblical roots of modern Jewish thought on revelation and its relation to authority and tradition. This is an extraordinary book in biblical criticism and in Jewish thought and above all one of its most illuminating contributions is how these two fields of inquiry enrich one another."—Moshe Halbertal, Professor of Jewish Thought and Philosophy, Hebrew University and Gruss Professor of Law, New York University School of Law


"This is a groundbreaking book . . . one of the most original works in Jewish theology that I have read in years."—Gary A. Anderson, Hesburgh Professor of Catholic Theology, University of Notre Dame


“Benjamin Sommer's extraordinary mix of scholarly rigor, historical imagination, lucid writing and honest theological concern brilliantly illuminate every subject he touches, and this most central of subjects, revelation and authority, is no exception. With this volume he offers scholarly and general readers alike refreshingly new ways of looking at some of the oldest and yet most pressing questions, with acuity and grace.”—Yehudah Mirsky, author of Rav Kook: Mystic in a Time of Revolution

Benjamin D. Sommer is professor of Bible at the Jewish Theological Seminary. He lives in Teaneck, NJ.
Loading...
or
Not Currently Available for Direct Purchase