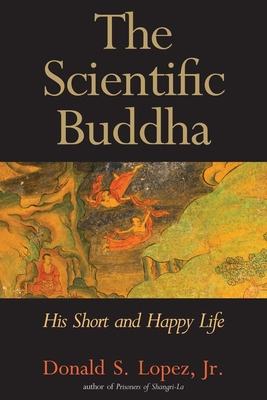 His Short and Happy Life (The Terry Lectures Series)

This book tells the story of the Scientific Buddha, "born" in Europe in the 1800s but commonly confused with the Buddha born in India 2,500 years ago. The Scientific Buddha was sent into battle against Christian missionaries, who were proclaiming across Asia that Buddhism was a form of superstition. He proved the missionaries wrong, teaching a dharma that was in harmony with modern science. And his influence continues. Today his teaching of "mindfulness" is heralded as the cure for all manner of maladies, from depression to high blood pressure.

In this potent critique, a well-known chronicler of the West's encounter with Buddhism demonstrates how the Scientific Buddha's teachings deviate in crucial ways from those of the far older Buddha of ancient India. Donald Lopez shows that the Western focus on the Scientific Buddha threatens to bleach Buddhism of its vibrancy, complexity, and power, even as the superficial focus on "mindfulness" turns Buddhism into merely the latest self-help movement. The Scientific Buddha has served his purpose, Lopez argues. It is now time for him to pass into nirvana. This is not to say, however, that the teachings of the ancient Buddha must be dismissed as mere cultural artifacts. They continue to present a potent challenge, even to our modern world.

Donald S. Lopez, Jr. is Arthur E. Link Distinguished University Professor of Buddhist and Tibetan Studies at the University of Michigan. A leading scholar of Buddhism, he is author or editor of more than twenty books. He lives in Ann Arbor, Michigan.


Praise For The Scientific Buddha: His Short and Happy Life (The Terry Lectures Series)…

"This edifying and often witty book is not only about busting myths.  It also ventures what Buddhism – now purged of the apocryphal “scientific Buddha” – might indeed teach the world today about altruism and the self."—Janet Gyatso, Harvard University
— Janet Gyatso

“There could be no more appropriate book for the Terry Lecture Series because this one so meticulously compares contemporary ‘sciences’ with what most of the world would acknowledge as an important and influential ‘religion.’”—Dale B. Martin, author of New Testament History and Literature
— Dale B. Martin

“Donald Lopez’s light-hearted biography of the Scientific Buddha sets the record straight by exposing the false resonance and pious misunderstandings between Buddhism and modern science. An eminently readable book, and a must for anyone interested in the convergence (or lack thereof) of these two traditions.”—Bernard Faure, Columbia University

"The Scientific Buddha is a welcome and timely intervention in the religion-and-science debates. In this eloquent and exquisitely crafted volume, Donald Lopez takes on the ill-begotten notion that Buddhism is a "science of happiness" that prefigures, and is fully consonant with, the findings of modern science. But the book is much more than a critique of slipshod appropriations or representations of Buddhism; Lopez goes on to argue that the real contribution of Buddhism may lie precisely in its critique of contemporary scientific hubris. Lopez's analysis is grounded in impeccable scholarship and a deep appreciation for Buddhist doctrine and history. It is also an absolute delight to read."—Robert Sharf, University of California, Berkeley
— Robert Sharf

“…offers a new and original perspective on how to understand the comparative relationship that has formed between Buddhism and science among the interested, educated public—in the ‘West’ as well as increasingly across Asia—over the last two centuries."—Todd Lewis, co-author of Sugata Saurabha: A Poem on the Life of the Buddha by Chittadhar Hridaya of Nepal
— Todd Lewis
or
Not Currently Available for Direct Purchase
Copyright © 2020 American Booksellers Association